Fiji’s flag carrier is upgrading their Business Class to lie-flat seats on flights to Sydney and Los Angeles from the start of 2020.

While we won’t be seeing these new seats on flights to Auckland anytime soon, the new seat product can still be experienced by those looking to fly via Nadi onwards to the US.

Sydney and LA get new Fiji Airways A350 from next year

According to Routesonline, the airline will be upgrading its Sydney and Los Angeles services from 1 January 2020:

Fiji Airways in last week’s schedule update opened reservation for its planned Airbus A350-900XWB service, as the airline last week announced the lease of the aircraft. Configuration is J33Y301.

Instead of the angled-flat Business Class seats that are currently featured on the Airbus A330s in a 2-2-2 configuration: on the A350, you’ll get a reverse herringbone seat with direct aisle access for all passengers. This is a similar seat to the one you can find on Virgin Australia, Qatar Airways and China Airlines. This upgrade represents a huge improvement.

The good news is that you can find award seats bookable with points flying from Sydney to Nadi on almost every day from 6 January 2020.

In the opposite direction, i.e. from Nadi to Sydney, there are award seats open from 1 February 2020 onwards.

If you want to fly on from Nadi to LA, your chances of getting an award seat are very low.

However, departing from LA, I can see seats open on 1-2 flights a week from 1 January 2020 onwards.

Read on for more details.

Fiji Airways is one of the few select Qantas partners where Qantas Points can be redeemed at the same price as for travel on Qantas itself – which is why it makes it into our ‘Best uses of Qantas Points‘.

Let’s have a look at the different types of Business Class products, and how to book an award seat to Fiji and/or the US, Japan, Hong Kong or Singapore.

When it comes to redeeming points, availability is ultimately what counts – and in our opinion, remembering that Fiji Airways operate as a Qantas Point redemption option may end up allowing you to use your points when otherwise Qantas may have no seats on offer.

There are two key types of redemptions you might consider with Fiji Airways—either to Nadi, which is their hub in Fiji as a destination, or connecting to the US or Asia.

You can also fly direct to Suva from Auckland, with 2-3 flights per week.

All flights are on a Boeing 737, with the exception of at least one daily flight from Auckland, which is often flown with an Airbus A330. The A330 flights are the ones to target. 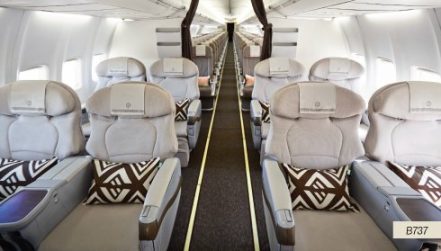 Auckland gets angled-flat Business Class seats on the A330. 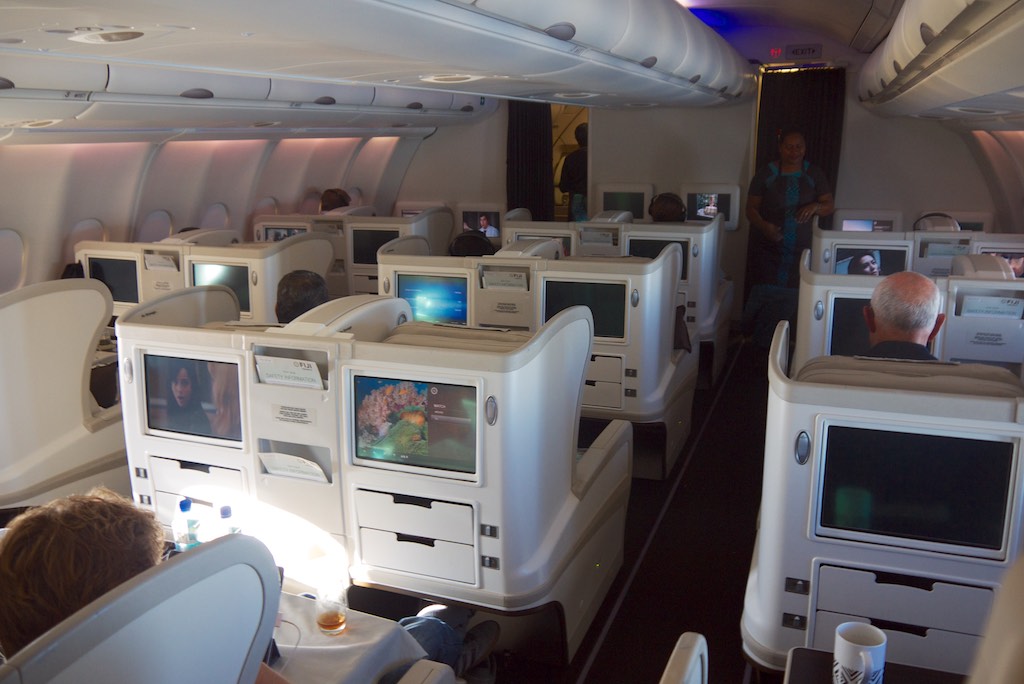 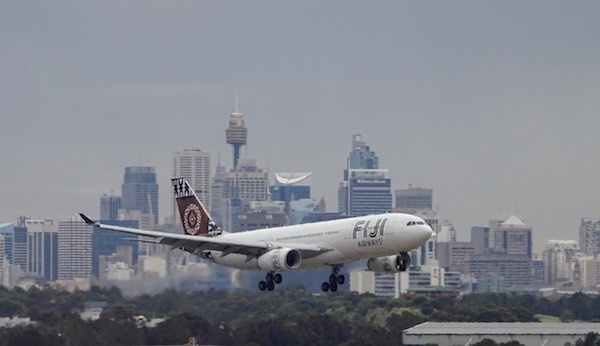 To the US, Japan, Hong Kong and Singapore

Frequencies to Asia are:

How to use Qantas Points to book Fiji Airways flights

The following figures are for a one-way Business Class flight:

You can also get great value out of using American Airlines AAdvantage or Alaska Mileage Plan miles for travel on Fiji Airways. For example, a flight from New Zealand to the US costs 80,000 AAdvantage miles. With Alaska, it’s only 55,000—plus you’ll get a free stopover!

Note that given Fiji Airways is a oneworld connect member—not a full oneworld alliance member—you cannot include travel on this airline in a Qantas oneworld Classic Flight Reward (round-the-world trip).

This is where using points for Fiji Airways gets interesting for the leisure traveller (or those with flexibility in their travel plans). As Qantas does not allow stopovers (more than 24 hours) on their redemptions, in order to spend some time in Fiji, you’ll have to book two separate awards.

A cheap stopover in Fiji en route to Tokyo from New Zealand, and en route to Los Angeles or San Francisco from Wellington/Christchurch can be booked for only an additional 12,000 Qantas Points in Business Class. However, for stopovers on any other route, you’d have to pay 26,000 more—that’s not really worth it, in my opinion.

Fiji Airways surcharges when booking with Qantas Points are far lower than if you were redeeming with Qantas. The taxes on the varying routes differ, so you’re best off doing a demo search to see the exact amount that will be owing.

What about Economy flights?

You can halve all of the points costs above for Economy travel.

It is viable from a cost point-of-view to use points to travel in Economy Class with Fiji Airways as the taxes are lower than flying with Qantas. For flights to Los Angeles however I’d suggest looking for a direct flight from Auckland with American Airlines in Economy Class if possible.

For more on this, you can read our more in-depth comparison of using Qantas Points for Qantas vs American Airlines redemptions to the US.

How to search for availability on Fiji Airways

You can get a monthly view using the American Airlines website. Otherwise, you can search day-by-day with Qantas or Alaska.

You can book online with Qantas, American Airlines and Alaska.

You should be able to book Fiji Airways flights with Qantas Points up to 353 days before departure. With AAdvantage or Alaska miles, you’ll have to wait until 331 days.

When it comes to redeeming points, availability is ultimately what counts. Remembering that Fiji Airways operates to the US and key Asian cities may end up allowing you to use your Qantas Points when Qantas and their oneworld partners are all booked up.

Fiji Airways generally has an inferior Business Class product to some of these airlines, with angled lie-flat seats offered on most of their medium and long-haul routes. However the A350 on flights to Los Angeles will be a welcome change.

Plus, the option of combining a trip with a stopover in Fiji could be attractive to many—especially where you otherwise couldn’t find award availability with other partners.

Have you ever flown Fiji Airways? What was your experience?

Fiji Airways gets new Business Class on the A350: use Qantas Points to book was last modified: June 20th, 2019 by Matt Moffitt