Qantas have announced that they’ll be operating a Perth to London direct flight with their new 787 fleet from the 24 March 2018.

In this guide we’ll look at this route specifically when it comes to the best value points redemptions – using Qantas Points, Asia Miles and AAdvantage miles.

Also, as Qantas fly seasonally from Auckland to Perth between November and April (QF111/QF112), there is a small window of opportunity for those on the North Island to fly to London on Qantas for the first time in 2018, with only one stop (albeit with a 21.5 hour layover). Obviously this isn’t going to make sense for everyone, and will likely only appeal to those who wouldn’t mind some time in Perth – however, for completeness, it’s important we cover this flight option off!

Options for using points for Perth to London direct with Qantas

Outside of Qantas Frequent Flyer, the main Qantas partners with points redemption opportunities on Qantas flights for New Zealanders are Asia Miles and AAdvantage. The latter, unfortunately, doesn’t offer Premium Economy redemptions on any carrier at this point, although we are likely to see this change in 2017.

We’ve rounded up the costs for Perth to London direct in all three programs, plus looked at pricing if you were to tack on the seasonal Auckland to Perth flight with no stopover (> 24 hours spent):

The pricing for other NZ cities for these programs are the same as Auckland (these would involve a second stop however).

Interested in which frequent flyer programs offer the best value for redemptions on this route? Jump down ↓

Neither Qantas, AAdvantage or Asia Miles permit stopovers of more than 24 hours on a multi-stop international itineraries without costing more.

Our full guide to building in stopovers or transits with Qantas Points is here.

Interested in doing Perth to London without a stop? Here’s where to start:

About the Perth – London route

The distance for Perth to London clocks in at just over 9,000 miles (via gcmap.com).

If flying from Auckland, to Perth, and then onto London, the total distance would be 12,320 miles, pushing the pricing up a band in both the Qantas Classic Award and the Asia Miles Award charts.

Qantas’ A330 fleet fly the route from Auckland to Perth, which features one of the best Business Class cabins in the world – though the plane will not feature the Premium Economy cabin that will feature on the 787 flying between Peth and London.

Perth to London will be Qantas’ first international route using their 787.

Qantas haven’t yet announced what the Premium Economy cabin on the route will look like, but otherwise the Economy cabin will be slightly roomier in pitch than most of it’s competitors, but comparable in seat width. The Business Class seat and cabin will be very similar to that on Qantas domestic and international A330 fleet. 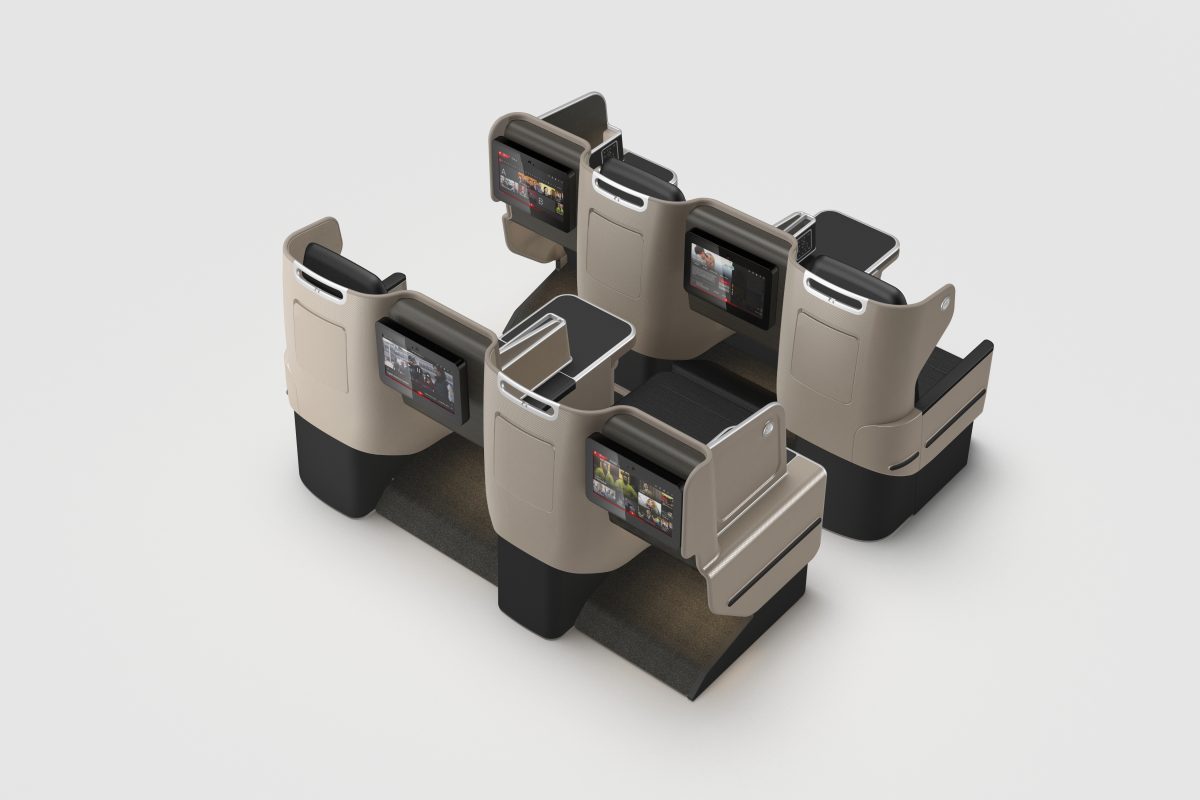 The 787 will likely go into service for training and familiarisation runs before the launch of the Perth to London direct flights in 2018.

Will Qantas make any award seats available on this flight?

Right now Qantas’ most competitive flights for points redemptions with Qantas Points or their frequent flyer points are usually their flights to the USA in Business or First Class.

Qantas are generally fairly predictable about releasing Business Class seats on the US routes – there aren’t many, and they open up two at the time when their booking calendar opens (353 days before travel) and then usually very few others unless folks who booked them cancel their points redemptions and these seats are usually then made available again. Sometimes other redemption seats do pop up but it’s rare.

Premium Economy availability is usually a little better, with a few seats popping up here when the calendar opens, and then again on and off as the flight gets closer – but of course still with low availability relative to other routes and no guarantees you can pick up a seat.

When it comes to availability for Perth to and from London, these are my general observations – who knows if I am right though:

All these factors make me think the situation will probably mirror the US redemption availability situation, where it’s tough to find seats unless you plan well ahead or are willing to jump on seats when they come up, often more last minute.

On the positive side, historically Qantas have been good about opening up plenty of award seats on new routes when they first open for booking – San Francisco for example had 2 Business Class seats on most dates to start with, and then another round of availability opened up again a few months later.

Qantas may do this again with the 787 Perth – London route too – once April comes, and bookings open, we will monitor it and keep you informed of any opportunities as they arise.

What about taxes and fees?

Flights originating in Auckland usually have lower fees and surcharges than those originating from Australian ports – from Auckland to Perth, for example, taxes and fees are only around $60 NZD using Qantas Points.

For the connection through Perth, I would hope to see lower fees payable with Qantas Frequent Flyer and Asia Miles redemptions than for comparable routes connecting via Sydney or Melbourne.

This route creates a great opportunity to look at some comparative frequent flyer program pricing.

There’s nothing particularly unique about this route or the 787 specifically when it comes to pricing, it’s just a nice time to remind you of some comparative strengths of different programs.

Qantas Points and Asia Miles are readily available in New Zealand, but primarily from credit card spend and travel partners.

Unless you still have an ANZ Qantas Visa card, your ability to earn Qantas Points and Asia Miles on everyday spend will either be with the American Express Platinum Edge, or Platinum Charge. Membership Rewards Points transfer to both programs at the same rate – 1:0.5.

Asia Miles comes out much better off in terms of redemption pricing, compared to Qantas which is comparatively high.

This table shows the % of Asia Miles needed for a redemption on this route vs Qantas Points:

Taxes and fees for a Qantas Frequent Flyer redemption vs Asia Miles should be fairly similar.

Not shown in our comparison table is the comparative cost of taxes for each program – AAdvantage are usually much cheaper than the competition thanks to not passing on the fuel surcharges otherwise imposed by most other programs in the region.

Well, there are no credit cards that are direct transfer partners of AAdvantage in the market here, but AAdvantage is a partner of Starwood Preferred Guest – the American Express Platinum Edge is a 0.99 Starpoint per dollar spent earner at supermarkets (where you can extend your earning reach through the use of gift cards).

1 Starpoint usually transfers to AAdvantage miles at 1:1 ratio, but transfers of 20,000 Starpoints will earn you 25,000 AAdvantage miles. As a result the effective earn rate on the American Express Platinum Edge is 1.23 points per dollar if you optimise your transfers and only transfer in 20,000 point blocks.

This is without even considering Marriott Rewards travel certificates, or bonuses on Starwood transfers to AAdvantage either.

It’s complex to the uninitiated in points – but in short, if you spend a little time thinking about the points currency you earn, you can dramatically increase your redemption power – you can read more in our AAdvantage and Starwood conversion guide if you’d like to learn how.

So, you can earn up to 1.5 Asia Miles or Qantas Points per dollar spent on the Platinum Edge, vs 1.23 effectively to AAdvantage via SPG. Let’s use these figures as a comparison of the spend required to earn enough points for the following redemptions:

As you can see, the differences are pretty marked – with Qantas usually always coming out more expensive. Qantas Points however will be much easier to collect for those who fly Jetstar and Qantas frequently, either domestically or Trans-Tasman.

Finally – another partner program (that also allows stopovers, like AAdvantage) is Alaska Airways MileagePlan, who also offer decent promotions for purchasing miles. Alaska doesn’t currently publish pricing for Qantas awards to Europe but this new flight might mean they do. Depending on the price, that could be an option in future.

I personally wouldn’t want to fly this route in Economy – my long legs (which are the original inspiration for this whole site!) just wouldn’t cope with the break. I find 10+ hour flights in Economy hard enough as it is.

If my end destination was London, I would consider this route in Premium Economy and Business Class. However it remains to be seen if Qantas will work their flight times to offer usable connections to other close European cities.

Regardless, a need to connect to another city in Europe would have this route way down my list given there are now so many one-stop options to a wide range of cities in Europe from the likes of Qatar, Emirates, Singapore Airlines and others – all available as points redemption options.

And if I was redeeming points for this flight in Business Class – the programs I’d look at would be AAdvantage or Asia Miles. By all means use Qantas Points if you have a large enough balance from regional travel or spend from the now discontinued ANZ Qantas Points card, but there’s more value to be had by looking further afield.

Which specifically I would use would depend on my current balances, any other travel I had in mind and where I was transferring the points from – but AAdvantage edge it for one way itineraries and their cheaper taxes, while Asia Miles may get the nod for the return, depending on their surcharges.

What would be the best ways to use frequent flyer points for the Qantas 787 Perth to London flight? was last modified: July 4th, 2017 by Daniel Kinnoch