The Sheraton Villas in Fiji are in the Starwood complex on Denarau, between the main Sheraton Hotel and The Westin.

In this review I’ll cover off why we chose the Sheraton Villas, how I booked them using American Express Membership Rewards and Starwood Preferred Guest points, and my thoughts on the Villas and the pools and other facilities available to guests. In short, I was pleased we stayed in a Villa for the space on offer – as a whole, the stay was good, but not great – here’s why.

I had a number of Starwood points in my account which I want to use for this holiday, giving the option to stay at either The Sheraton Fiji, The Westin Denarau Resort & Spa, or the The Sheraton Villas Fiji all on Denarau, or at the newly opened Sheraton Tokoriki resort out on an island around an hour by boat off the coast.

The Sheraton Tokoriki is available for 20,000 Starpoints per night in a standard room but wasn’t yet open when I was trying to lock in the booking a few months before. As a result I couldn’t really find any information on family rooms or room configurations, and no traveller-taken images of the place on hand.

Given the high price, and boat ride as well, and with two young kids with their own specific food needs, we decided to pass on a brand new island hotel without all the necessary info at hand. I was sorely tempted to spend some time in a new hotel though.

The Sheraton and The Westin rooms seem very similar, with two story buildings on an angle leading out toward the coast, all with balconied rooms either facing the ocean or the gardens. Interconnecting rooms are available for families, but on looking deeper, it seemed like the Sheraton Villas would be a better bet given they come with a small kitchenette, and two or three bedroom configurations – with access to all of the main Sheraton and Westin facilities a short walk away.

Our stay at the Sheraton Denarau Villas Fiji was arranged for 6 nights, taking advantage of the Starwood 5th night free on 5 night stays and adding another night on top. The 2 bedroom villa we booked had a rate of around $485 NZD / night, which was cheaper than two rooms in either of the hotels and with more space.

But I booked using points transferred over from American Express to Starwood Preferred Guest. The room was available online, and the total cost was 123,250 Starpoints – which to this day I still can’t quite figure out the per night pricing on. I think the standard price was 24,000 points per night, but as to why the rate changed for some of the nights, I have no idea.

Our stay at The Sheraton Denarau Villas The Sheraton Villas are about a 5 minute walk from the Sheraton itself, and another 5-10 minute walk to The Westin. We scored a top-floor Villa right at the rear of the complex (pictured above), as close to the Sheraton and shops and as far away from the ocean as you can get. It’s not far though, so wasn’t a problem.

The Villas are different in style to both the Sheraton and the Westin next door, which helps break up the resort, and have two pools within striking distance of your apartment – one main pool within the accommodation area which feels (but isn’t) fairly private to the Villas, and a beach-side pool.

This was the view from our balcony – 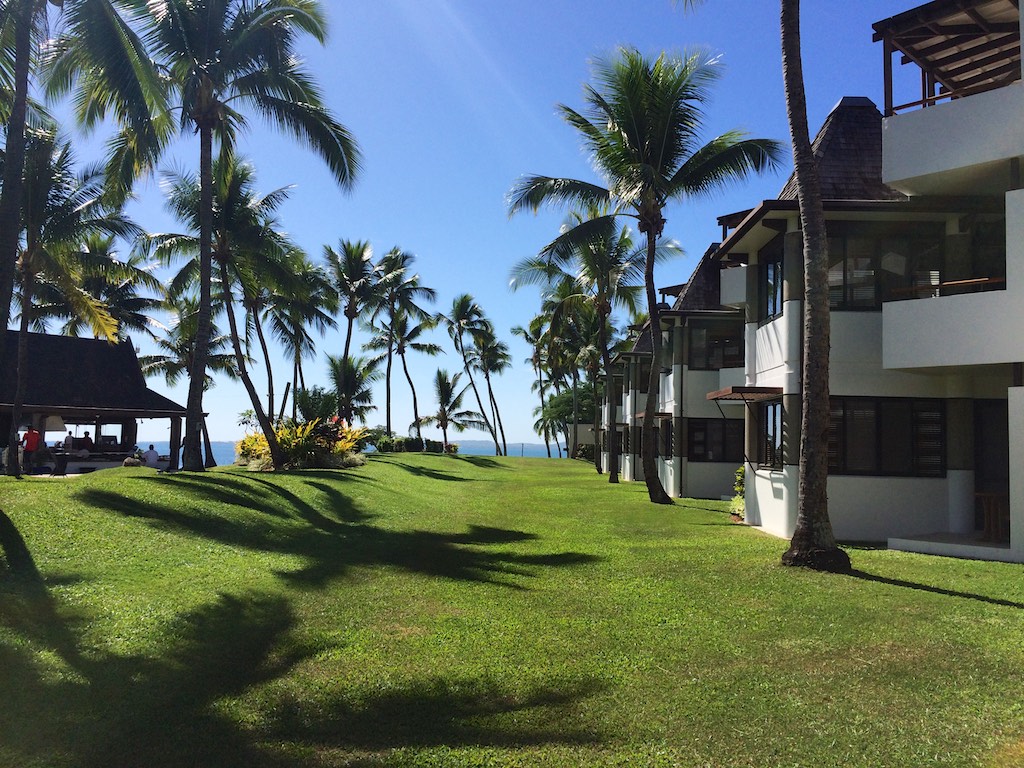 The Villas are made up of two connecting rooms which essentially act as a small bed-room apartment. Behind the front door are another two front doors to each apartment which can remain open, with the apartment on the left containing the kitchenette, living area, master bedroom, balcony and bathroom / laundry facilities, and the room on the right with two twin beds, balcony and another bathroom. This is the master bedroom with balcony at the end (we didn’t use this balcony much, it was in the full sun most of the day) The living area – the kitchenette is immediately behind me

The second bedroom, with twin beds Another shot of the twin bedroom

We didn’t spend heaps of time in the rooms, but it was useful to have a small kitchen with a fridge, a cooktop and a microwave to be able to heat food for the kids and eat a normal breakfast without paying too much at the hotel. There’s a small shop a couple of minutes from The Villas so it was easy to stock up on snacks, milk and the like.

Beyond the Villas pool pictured before, there’s then another pool and bar area which is used by guests at both the Westin and The Sheraton given the Villas are in the middle of them both. The view from this pool at sunset was pretty great – as it would be at The Westin too which faces exactly the same direction, another few hundred metres along the cost.

Linking up with The Sheraton Fiji

The Sheraton Villas are linked, as I mentioned before, to the main Sheraton Fiji resort. That’s where you’ll check in, and eat most of the time (or at The Westin). The entrance to the main Sheraton Fiji resort

Weirdly, there was a regional presidents and leaders conference going on for a couple of days while we were there. Most of the South Pacific’s contingent of bodyguards and Range Rovers were on hand to support them, but none of the usually public areas were really off limit to guests and it made for an odd experience wandering around the Lobby. 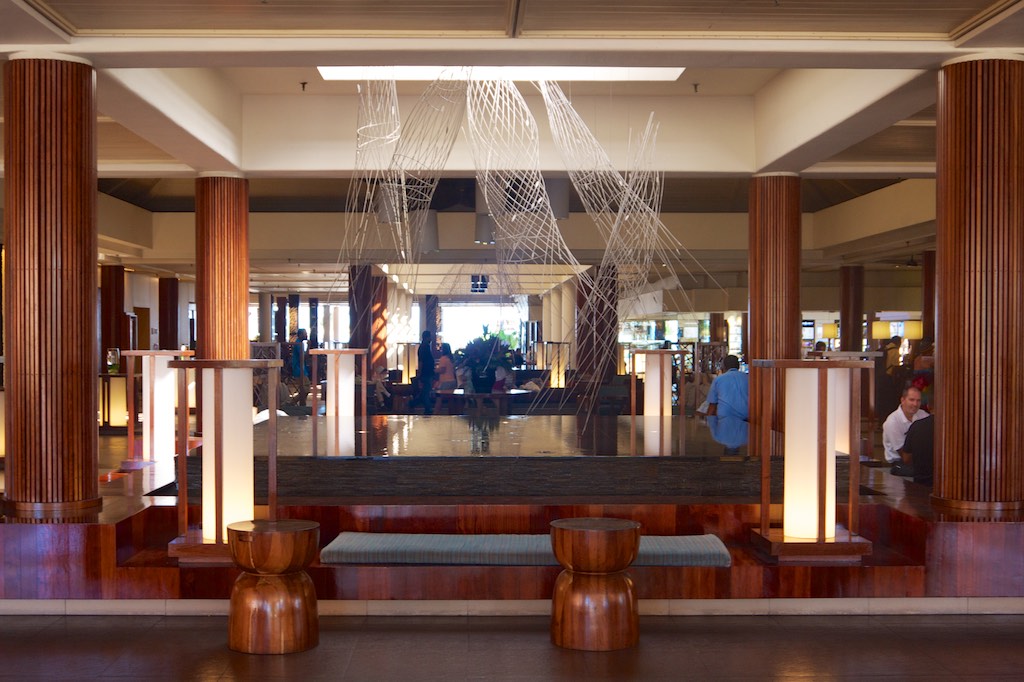 There were two large restaurants on the beach-side of the main building, one for the hotel buffet at breakfast and in the evening, and another smarter restaurant sunk around the main Sheraton Pool area.

We mostly used the former restaurant, given this was a family stay. The evening buffet was pretty good with a wide range of food, some cooked to order with the chef, and a theme (e.g. seafood, Indian) each night alongside Fijian fare. Given the linked resorts, your room number can also get you food and drink at The Westin too, after a short walk from The Villas to The Westin complex. The Westin Ocean-front rooms with a large chess-board outside, facing the water The ocean from The Westin – there’s no swimming or access to the ocean unless you walk around to the Sheraton which has a small beach, but even then, the Pools are nicer to use.

The Westin Pool complex was much more my taste than those at The Sheraton – a range of small pools of different depths which are fun for children and adults alike to swim in.

The only downside? The water particularly cool, to the point where you couldn’t stay in for too long. But I’d rather that than it be a bath. 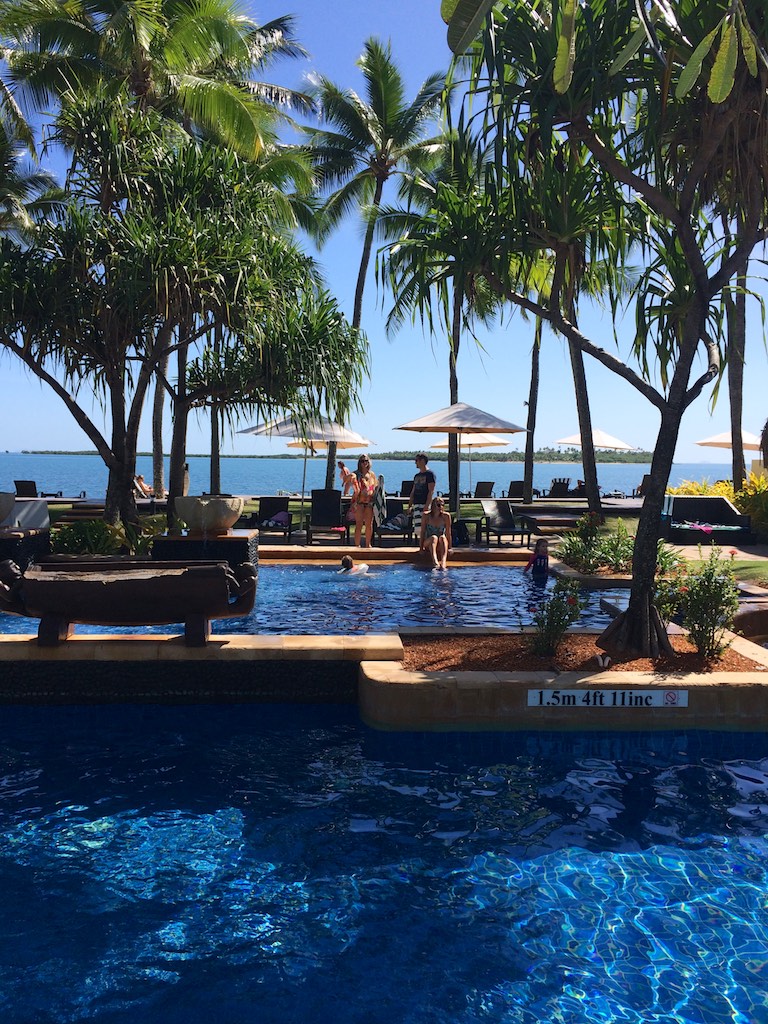 Just behind The Westin pool is their main lobby, restaurant and cafe / shops area. It’s very dark and cool, and the food we purchased both poolside and at the small shop I thought was better quality than The Sheraton – and similarly priced. I also went on a heli tour one morning for 1/2 hour. This was arranged by the hotel, and I’d hoped to go out over the sea and take a look at some of the surrounding islands, but unfortunately the only tour running was one inland over the main mountain range on the centre of the island. It was still very pretty and enjoyable. 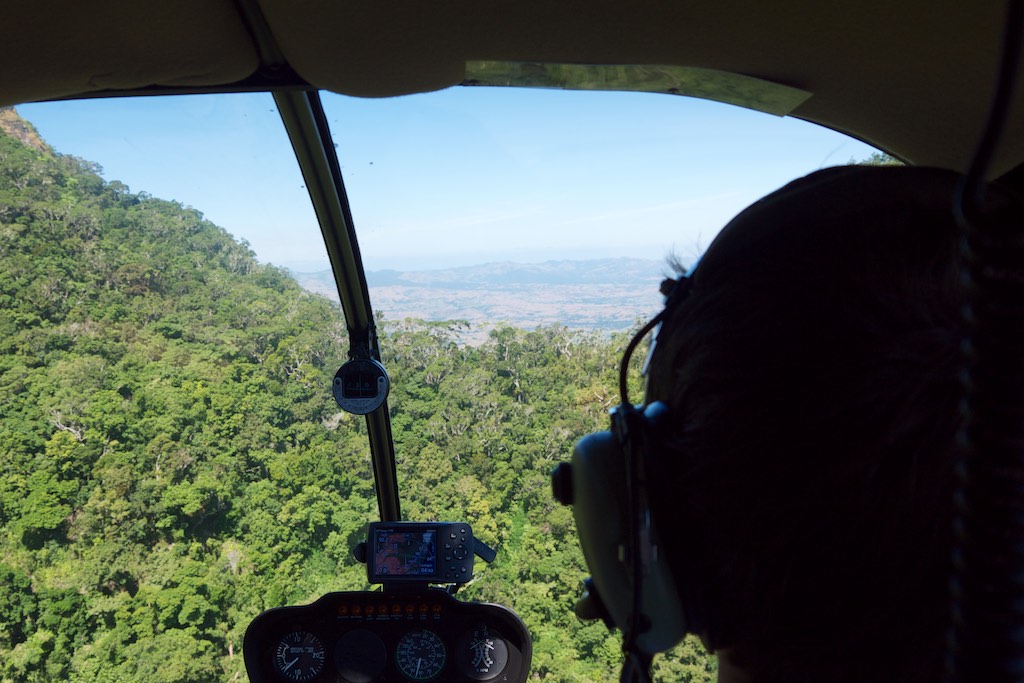 I had mixed feelings about this stay. On the one hand, I really enjoyed the extra space the Villas gave us, and there was nothing at all wrong with the room. But, to be expected, our experience was both very ‘Denarau’ and Sheraton – neither the place nor the brand to me related to a particularly premium experience.

The staff were universally nice and friendly, but our kids didn’t have such a great experience with the Sheraton kids club either (unfortunately due to an over-zealous ice-cream eating competition – you can fill in the blanks), and while we weren’t planning on using the kids club much, the fact it was completely off the list for us to use was a bit of a bummer.

The non-kids club activities that staff arranged were good though, with face painting and basket weaving both a hit. Again, I couldn’t fault the friendliness of everyone in the resort.

We really enjoyed the pools at The Westin, and ended up spending a bit of time there given it wasn’t too far away.

All up, I felt like this was an acceptable use of points. Next time, if using Starpoints, I’m definitely going to check out the Sheraton Tokoriki island setup in terms of rooms, family suitability, and pricing.

A stay at the Sheraton Denarau Villas Fiji, with some extra thoughts on the Westin Denarau was last modified: March 23rd, 2019 by Daniel Kinnoch