As part of a quick two-night trip to Shanghai before meeting the Point Hacks team in Hong Kong, I thought I would try out two of the city’s better priced American Express Fine Hotels & Resorts properties, which both happen to carry the Shangri-La brand.

This review covers the second night of my stay, following my stay at the Jing An Shangri-La.

The Pudong Shangri-La is located in Lujiazui, the main financial district in Shanghai, and is a short walk to Metro Line 2.

This property is more convenient to Pudong International Airport in terms of time and travel distance than the Jing An Shangri-La.

For this stay, I received the following benefits: The American Express Platinum Charge also sees card members with an instant status lift to Jade with the Shangri-La Golden Circle loyalty programme. This provided additional benefits, such as a choice of up to three in-room amenities.

The Pudong Shangri-La is ranked #4 out of 4,749 hotels in the area on TripAdvisor.

I booked a base ‘River Wing Deluxe’ room and was upgraded to the ‘Grand Tower Premier’ room at check-in.

The Pudong Shangri-La is made up of two buildings, with the River Wing adjacent the river, and the Grand Tower set further back.

The upgraded room was 13m2 larger, which provided extra space for a walk-in robe, and a more generously sized living area.

On one side of the room is a King Bed, a dressing table, and TV.

In the centre adjacent the window is a full-size executive writing desk. I could have spent a week working from here!

On the far side of the room was a sitting area, and another TV.

As you can tell, the room was generous in length. The floor-to-floor windows look out towards the Bund. More expensive rooms in the Grand Tower on higher levels afford unobstructed views over the top of the Pudong Shangri-La River Wing, as shown below.

The bathroom was not quite as modern as the Jing An Shangri-La, but did the job for a one night stay nonetheless. One criticism was that the marble tiles in the shower were beginning to crack along the edges of the wall.

Opposite the bathroom was a walk-in room with wardrobes and luggage storage space.

Off the hallway into the main room was a small nook with coffee machine, and mini-bar.

The complimentary in-room amenities included fruit, a selection of traditional Shanghainese sweets, two bottles of sparkling water, and a box of chocolates.

The lobby and check-in area of the Pudong Shangri-La Grand Tower are expansive. There are plenty of check-in desks along the length of the building, with little wait to check in and out.

I used my Fine Hotels and Resorts food and beverage credit towards a buffet dinner at Yi Café for myself and two friends.

The food selection is great, with 13 culinary theatre stations featuring Chinese, Western, South-East Asian, Japanese and European cuisine. However the quality was a bit hit or miss.

The buffet also offers free coffee, tea and soft drinks, and little containers that you can fill with lollies and take away with you.

I also had a late night drink at Jade On 36, which is a bar located at the top level of the Grand Tower. You buy one drink and effectively get a platter of chips and nuts which I consider good value.

I skipped the complimentary buffet breakfast as I had an early morning flight, and knew that I would have a chance to enjoy some dim sum in Cathay Pacific’s new Business Class lounge at Pudong International Airport.

The Pudong Shangri-La is a few minutes walk from the Lujiazui metro station on Line 2, providing an easy connection to Pudong and Hongqiao Airports, and Shanghai’s high-speed railway stations.

There is no underground connection to the metro from the hotel, so take this into account in inclement weather.

The hotel is also a short walk to attractions like the Oriental Pearl Tower, large shopping malls, and a waterside area that is far more relaxing and less crowded than the Bund on the opposite side of the river.

This Pudong Shangri-La was perfect for a one-night stay before my flight to Hong Kong. It took me only 35 minutes to travel from the hotel to Pudong using Line 2 and the Maglev high-speed train.

While the room size was more generous than the room I stayed in at the Jing An Shangri-La, there were elements that felt both cheap and dated.

The generous Fine Hotels and Resorts food and beverage credit can make a stay here especially worthwhile when rates are low. 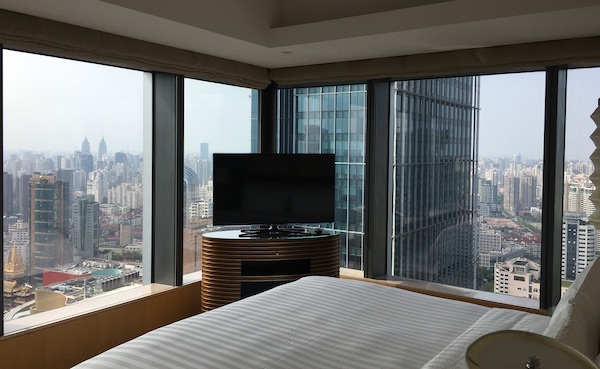 Read our review of Jing An Shangri-La, Shanghai