As part of a quick two-night trip to Shanghai before meeting the Point Hacks team in Hong Kong, I thought I would try out two of the city’s better priced American Express Fine Hotels & Resorts properties, which both happen to carry the Shangri-La brand.

For my first night, I was keen to find a hotel in a location convenient to the metro, and also nearby where friends live and work. Jing An is known by local Shanghainese as being the main business and shopping heart of the city, so this Shangri-La was a logical choice.

While the fully-flexible rate of $399 was not cheap, this was combined with a ~$157 hotel credit and buffet breakfast for two. This meant that booking through American Express’ Fine Hotels and Resorts programme made sense. Access to the programme is provided by holding an elite American Express card, like the American Express Platinum Charge.

For this stay, I received the following benefits: The American Express Platinum Charge also sees card members with an instant status lift to Jade with the Shangri-La Golden Circle loyalty programme. This provided additional benefits, such as a choice of up to three in-room amenities.

The Jing An Shangri-La is ranked #16 out of 4,749 hotels in the area on TripAdvisor. This is a decent spot for the property considering the number of excellent hotels in the city.

I booked the base ‘Deluxe’ room and was upgraded to a ‘Premier’ room at check-in, which is about 10m2 larger and on a corner of the building, which results provides expansive views over the city.

The room was configured as a large bedroom, with a TV in one corner, a small armchair in the other, and a desk along the far side wall.

The bathroom has its own window which is not common from hotels that I have stayed in, which gave it abundant natural light. The toilet is in a separate room, as is the bath and shower.

The bathroom was stocked with L’Occitane amenities.

The city views from the room were excellent.

The complimentary in-room amenities included hot tea, a fruit basket, two bottles of mineral water, and a box of chocolates.

The lobby and check-in area were underwhelming for a five star hotel.

The complimentary buffet breakfast is served on the ground floor at Café Liang, and had a great selection of breakfast food, including desserts which even I couldn’t say no to.

I used my Fine Hotels and Resorts property credit on an excellent massage, but have no photos to share as I left my phone in the hotel room in an attempt to detox from electronics for a while.

One thing to note is that at check-in you may be offered a discount voucher for the massage. This can only be used where you pay for the massage upfront, and not add the price to the room bill. So sadly it cannot be stacked with any room credit.

The hotel overall was clean and tidy with kind and genuine service from all staff that I spoke to.

The hotel is only a few minutes walk from the Jing An metro station on Line 2, providing an easy connection to Pudong and Hongqiao Airports, and Shanghai’s high-speed railway stations. You can walk from the hotel to the metro station via a mall without needing to go outside, which is helpful during inclement weather.

The hotel is also a short walk to attractions like Jing An temple, and shopping and dining around Nanjing West Road.

This hotel stay was excellent, with the Fine Hotels and Resorts benefits making the stay even more worthwhile. The massage at the hotel was exceptional and my back felt great for two weeks after!

I simply wish I had enjoyed some of the other extras the hotel has on offer, such as the swimming pool, spa and gym. 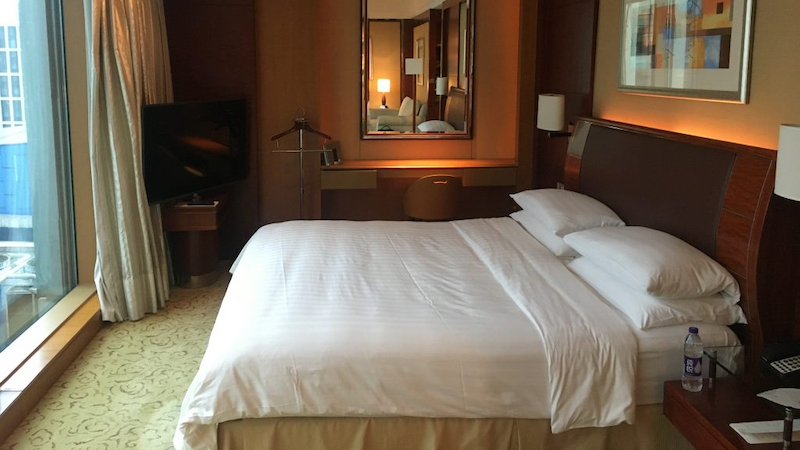 Read our review of the Pudong Shangri-La, Shanghai