Spend an hour or so in the Qantas Club lounge in Cairns and it’s perfectly fine, but we wouldn’t recommend arriving at the airport early for it.

Highlights include the natural light, bar and kids’ club, with improvements to be made on internet, noise and food.

This Qantas Club is only for domestic flights; Qantas and oneworld international flights are serviced by the Reef Lounge in the International Terminal (free for Priority Pass members).

The opening hours are from 4:30am (Monday to Saturday) and 5:55am (Sunday) until the last Qantas departure.

After checking in and clearing security in the Domestic Terminal, wrap around to the left twice, following the signs to the Departure Lounges on the first floor up the escalators.

When I visited at its noon peak, this lounge was 70% full, which due to its open-plan nature, felt quite busy and noisy.

Aesthetically though, this lounge is beautiful with its large amounts of natural light and tarmac views:

The main area and window seating is ideal for couples and groups:

If you are wanting to get some work done, the large work table in the middle is recommended, but just remember that the power points are hidden underneath the table. Or you can use the business centre:

The kids’ club in the corner is a bonus:

The bathrooms are big and clean.

The spread of food at lunch was pretty good, with soup, pasta, Mediterranean-style salads, make-your-own toasties, cold meats, plain cheese, crackers, fruit, biscuits and a pancake machine. Unfortunately, there were no labels on the food, which makes it hard for travellers with special dietary requirements.

The bar (which opens at noon) has Heineken and XXXX on tap, bottled beer, ciders, self-serve white and red wine:

There is a barista in between the food and bar (no picture), and a separate tea, espresso machine and biscuit area near the tarmac and business centre:

The internet speed was slow. I tried to connect to the Virgin Australia lounge (with a password from the Sydney lounge from a couple of days prior), but the signal strength was too weak. 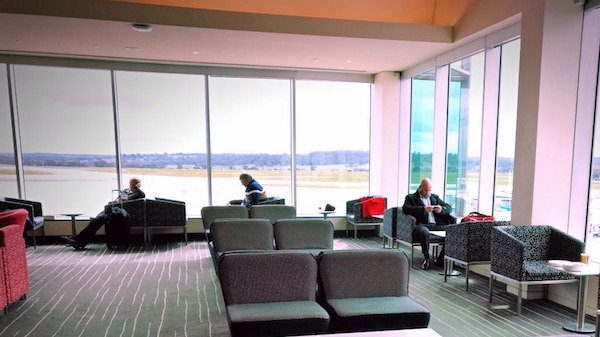 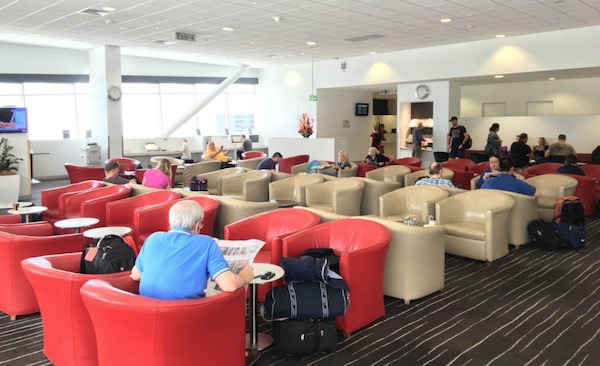 Read our overview of the Qantas Club Cairns Lounge

For a smaller airport, this lounge does just fine in feeding you and giving you some space to relax and/or work before your flight out but compared to other lounges in Australia, it can seem on the smaller, more crowded and noisier side.

If you are travelling with children, the separate kids’ area is great, however if you are going to be doing some work, be prepared for noise and a slow internet connection.

The food and beverage service could be improved by labelling food and putting a sign up to say that the bar is not open until noon.

A perfectly acceptable, but not exceptional, lounge.