My family had always thought about visiting New Zealand for a holiday, as it was one of the few places close to Australia that we hadn’t visited together yet (we tend to stick to Southeast Asia).

Finally, we decided to make it happen over the 2016-17 New Year break, as they were already going to Melbourne. After some planning, I booked their Melbourne to Auckland flight in Emirates First Class (54,000 Qantas points per person). My brother and I just needed to get to Auckland with minimal fuss, so we decided on Qantas’ seasonal direct flight from Perth.

International Qantas flights from Perth are a bit of rarity, ever since they effectively abandoned the city in 2014. However fast forward a few years, and they’re starting to rebuild their presence with regular Singapore flights, flights to Auckland during the summer and, of course, the flagship Perth – London flights on the horizon from March 2018!

Luckily for me, searching for availability was not an issue. Through the Qantas Frequent Flyer website, there were at least four seats open for the flight departing on New Year’s Eve. Undoubtedly people preferred to avoid flying over New Year’s Eve, but I had no such qualms and snapped up two seats eagerly.

The aircraft: Airbus A330

This flight was operated by an Airbus A330-200, of which Qantas has 18 in total. 16 have been refurbished with the new Business Suite and are commonly deployed on the transcontinental routes, like Perth to Sydney/Melbourne/Brisbane.

There are 28 seats in Business Class, divided into two cabins. Having sat in the main cabin previously, I opted for seats in the smaller rear cabin this time.

We arrived at the airport just before check-in opened. While people were already lining up for Economy, the Business Class line was still empty. It didn’t take long to drop our bags, clear immigration and security and head to the lounge. There is no Express Path in Perth. 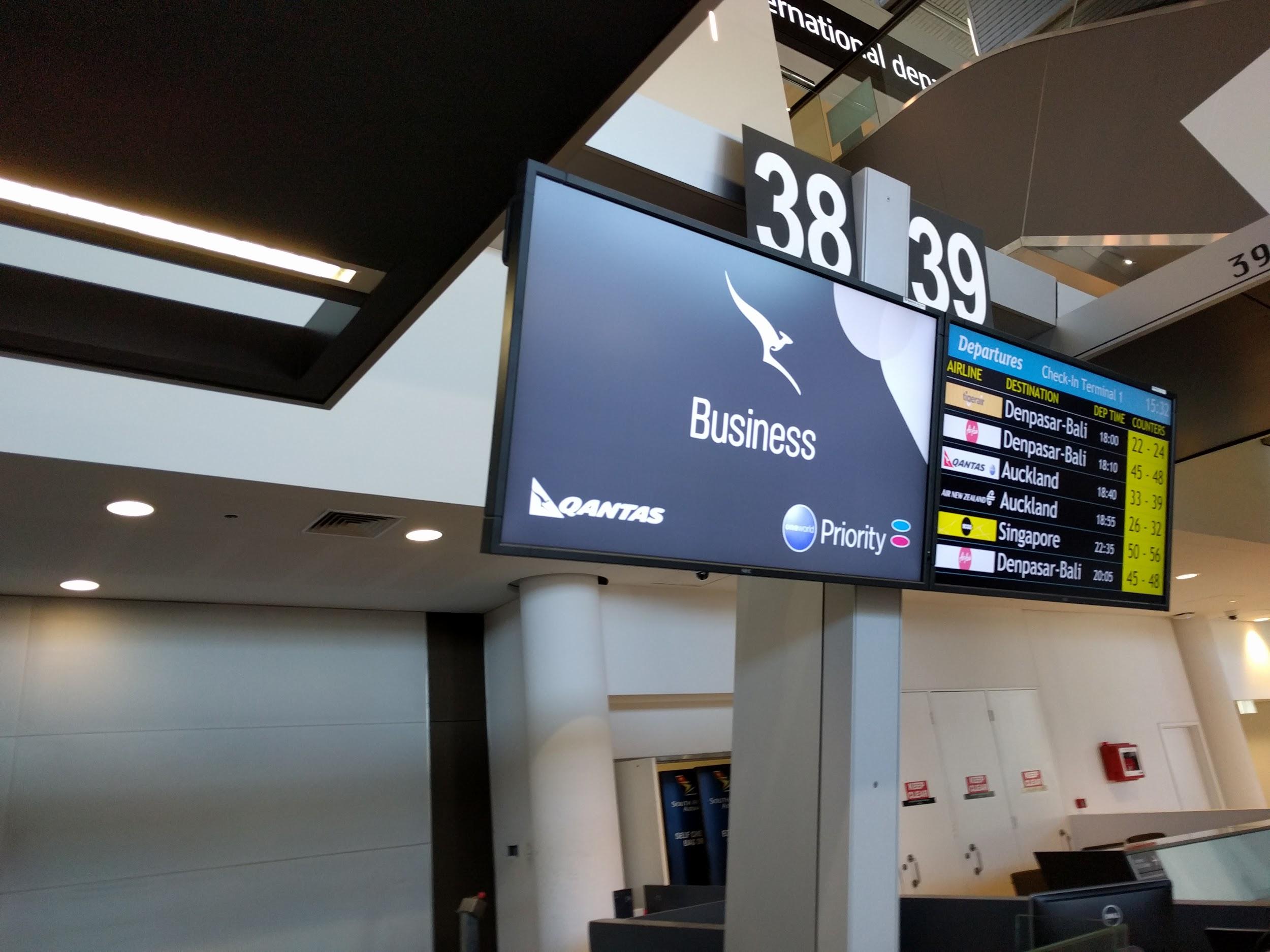 As most of you will know, Qantas’ Perth International Lounge is small in area with a limited food selection. The hot food consisted of chorizo stew with rice. Desserts included carrot cake. I also helped myself to the customary toastie station to finish off the afternoon tea. 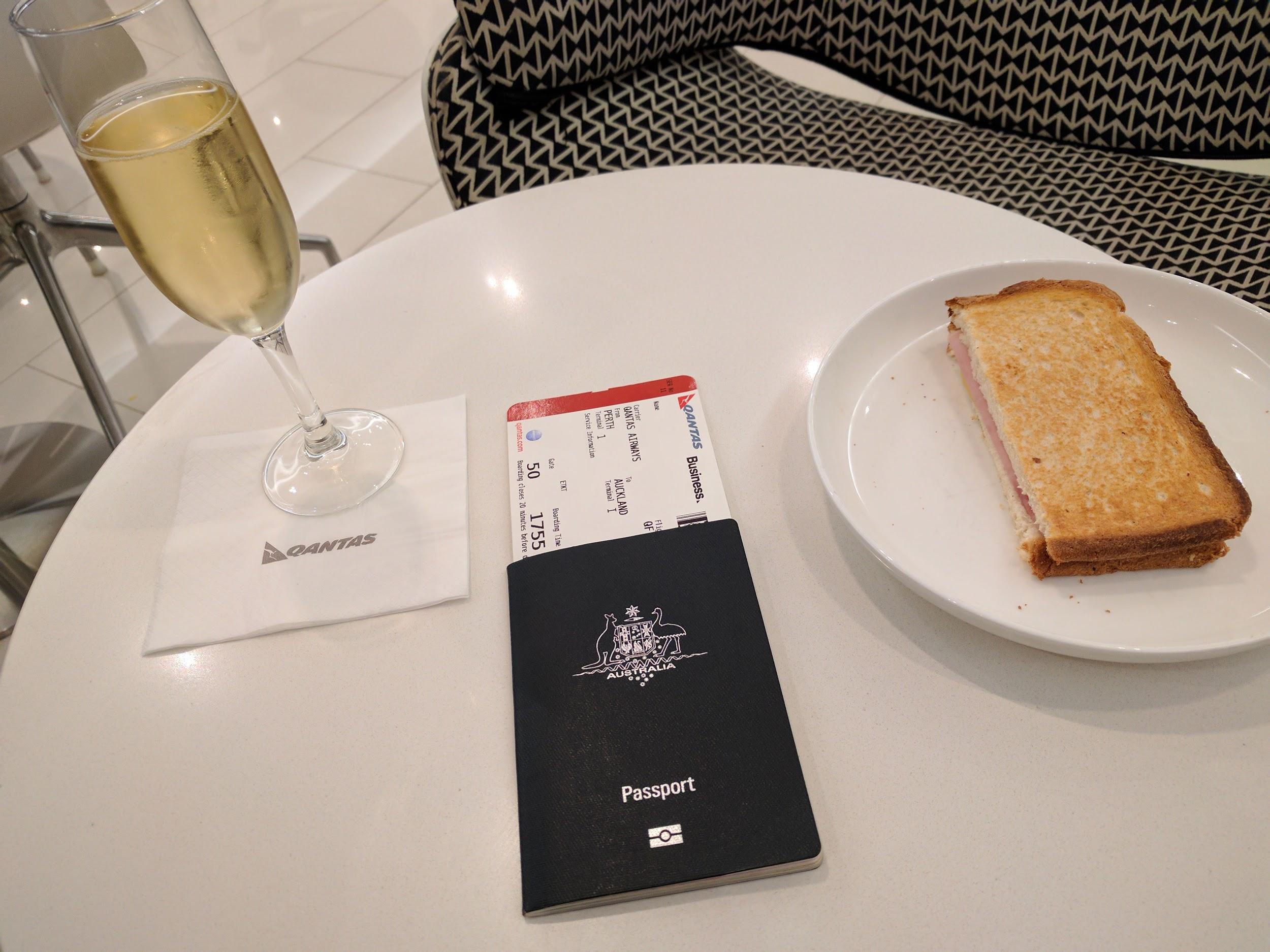 After two hours of relaxing, it was time to head to the gate! We would be boarding through the new gate area, which is A380-friendly for Emirates flights to/from Dubai. The adjacent Emirates Lounge was not yet open for their evening service, otherwise, we would have had access to it too. 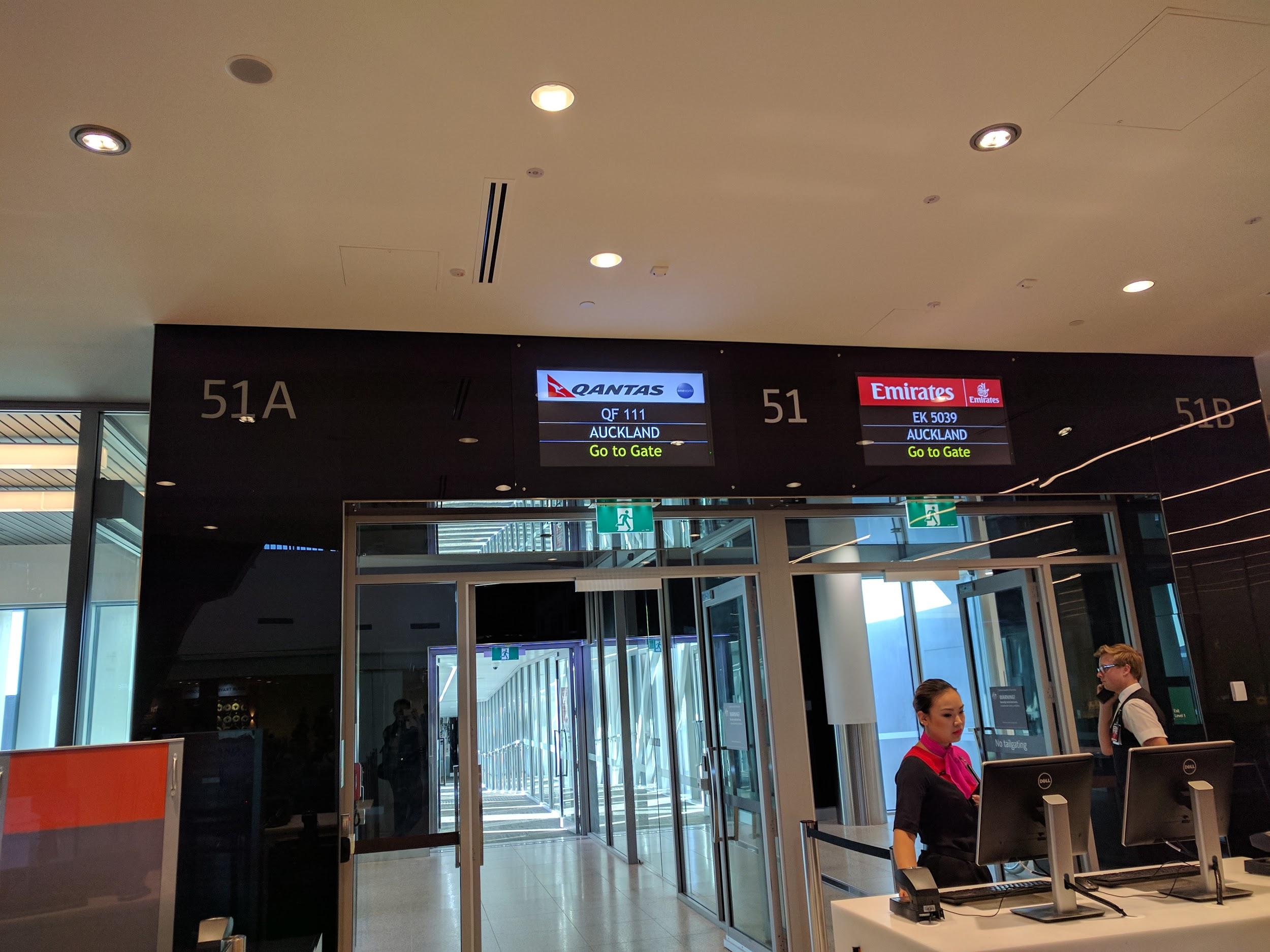 First in line, waiting to board!

I headed to 7K, the last window seat in the small 6-seat rear cabin. As a bulkhead window seat, there was a deep storage bin available for use. My brother was seated in the adjacent 7F, although it was not possible to talk to him without leaving my seat.

Jack Spade amenity kits were given out, featuring ASPAR products and the usual essentials.

As a bonus, Qantas pyjamas were also distributed (although they were in the old design). My first pair of Qantas PJs

Finally, we received an arrivals Express Path pass for use in Auckland. The menu for the flight is below. Passengers in Economy were served dinner, while Business Class was treated to a three-course supper and light breakfast.

The supper choices were available for pre-order with Select on Q Eat, where I originally picked the online exclusive Peking Duck. However, after takeoff, a cabin crew member told me they had loaded a smoked salmon by mistake. Also, by the time they were serving small plates in the rear cabin, they had run out of the crab rillettes.

I was slightly disappointed to miss out on two of my first preferences but went ahead with the Moroccan cauliflower soup with za’atar flatbread for the small plates. 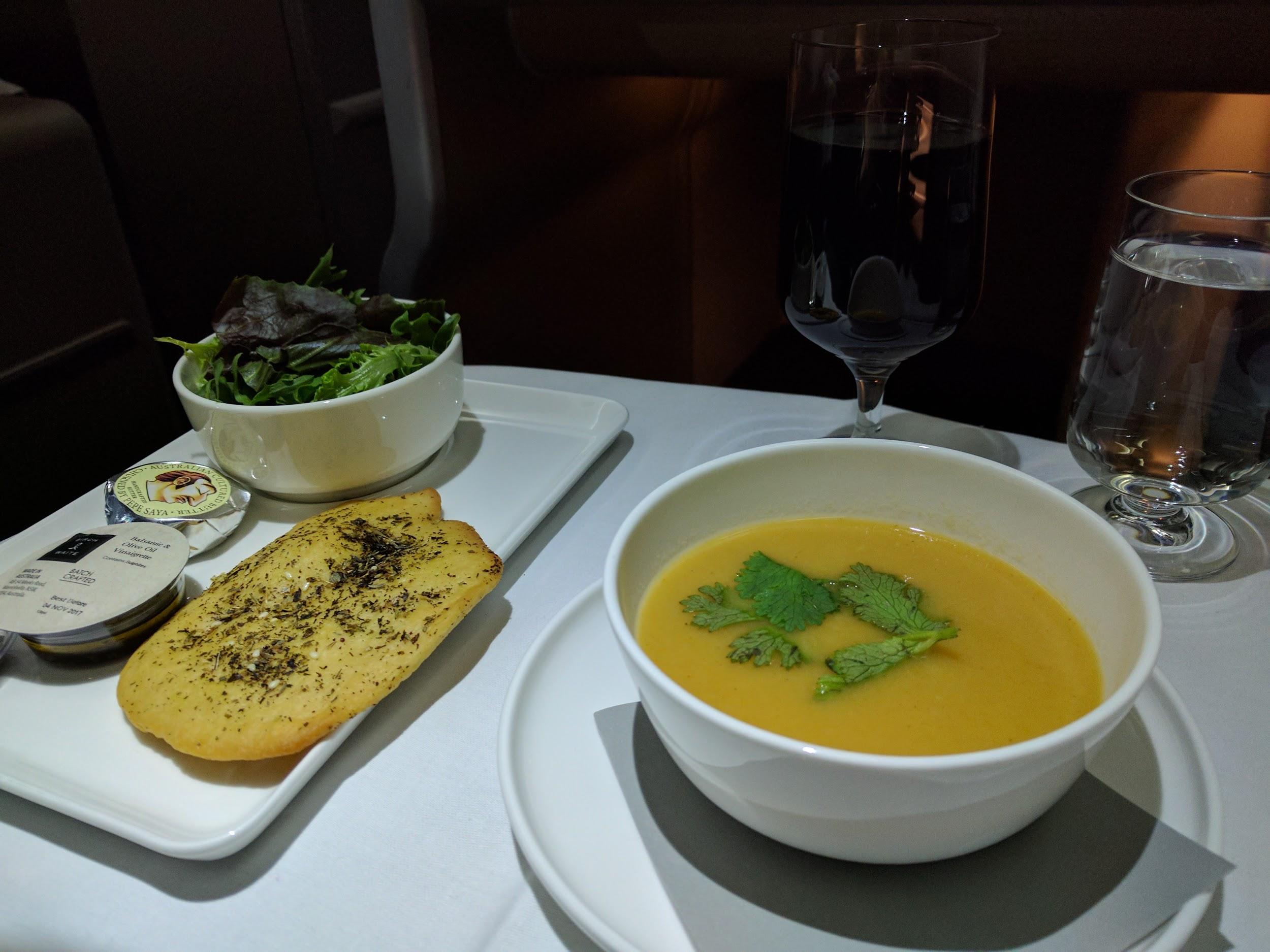 Then the lemon chicken with steamed rice for the main plates. 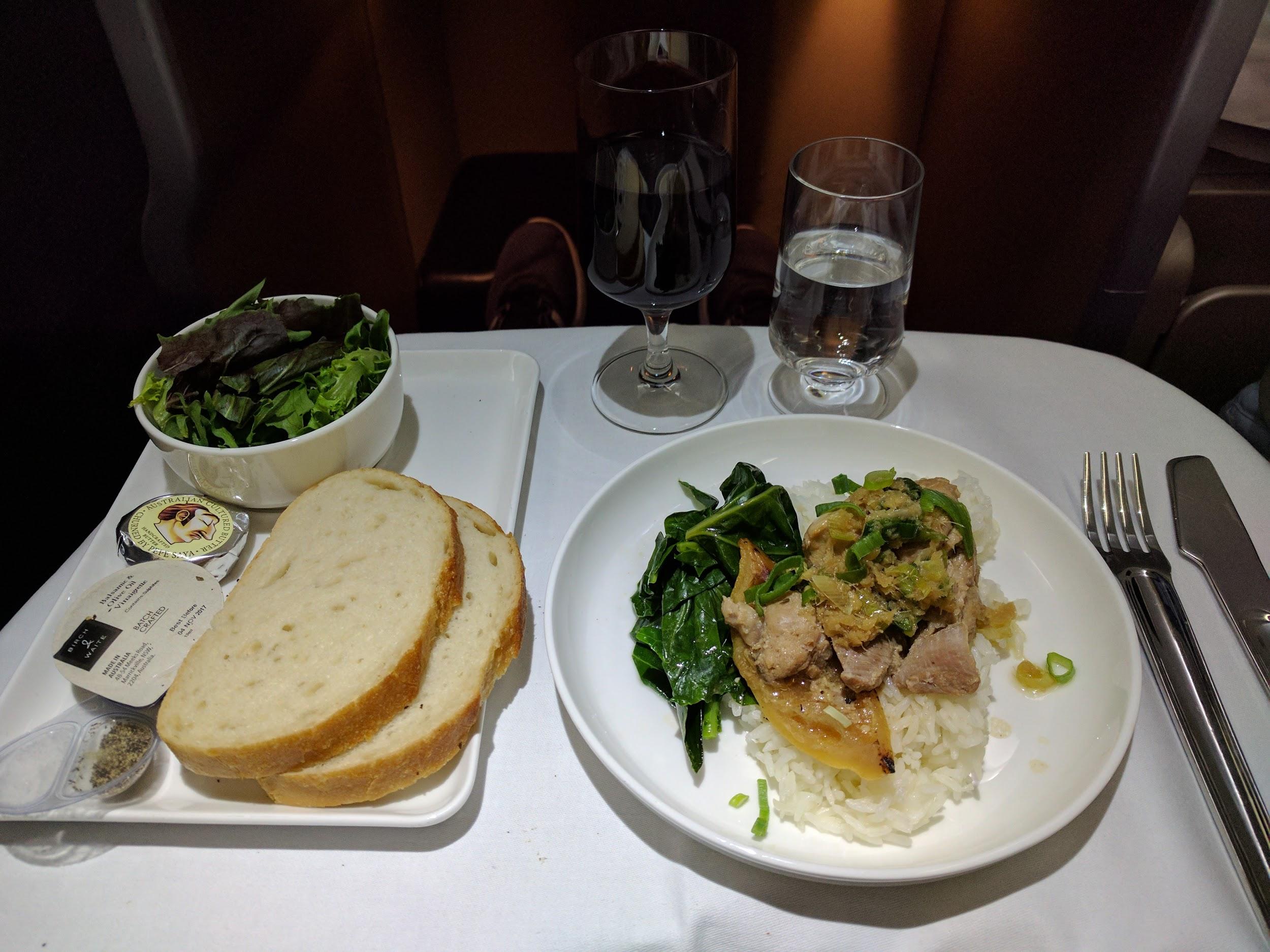 And finished off with the bread and butter pudding for dessert. All three dishes were great, with no complaints at all. About 40 minutes before landing, a light breakfast was served. This was a small item on one plate, as the A330-200s don’t have the galley space for a full second meal service. I chose the spinach and feta baked egg. 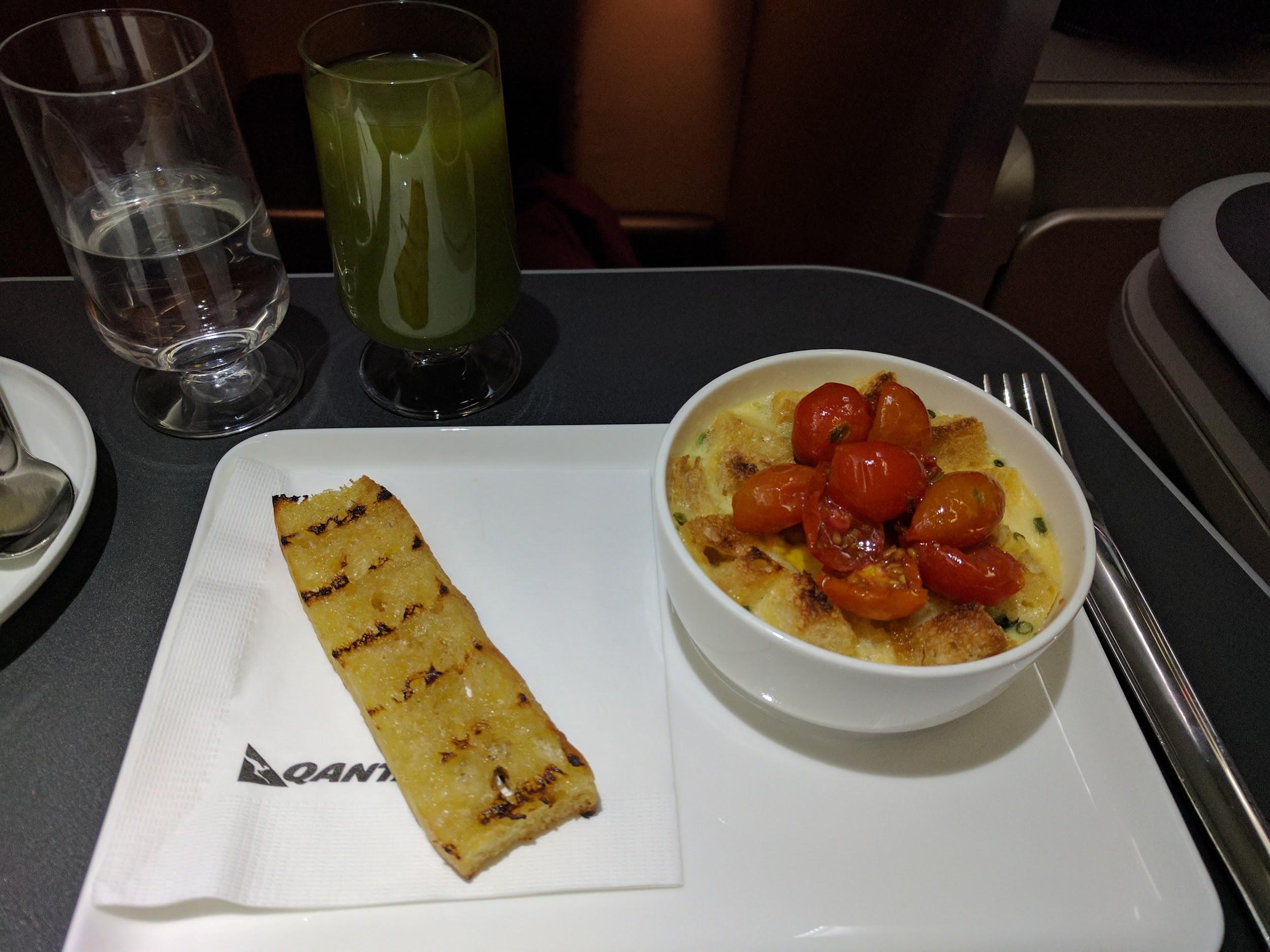 I wasn’t too hungry given it was midnight Perth time, but it tasted fine for a hot breakfast item.

As this was a red-eye flight with a short flight duration and horrible time difference (landing in Auckland 6am local time/1am Perth time), I was appreciative of the bedding provided. 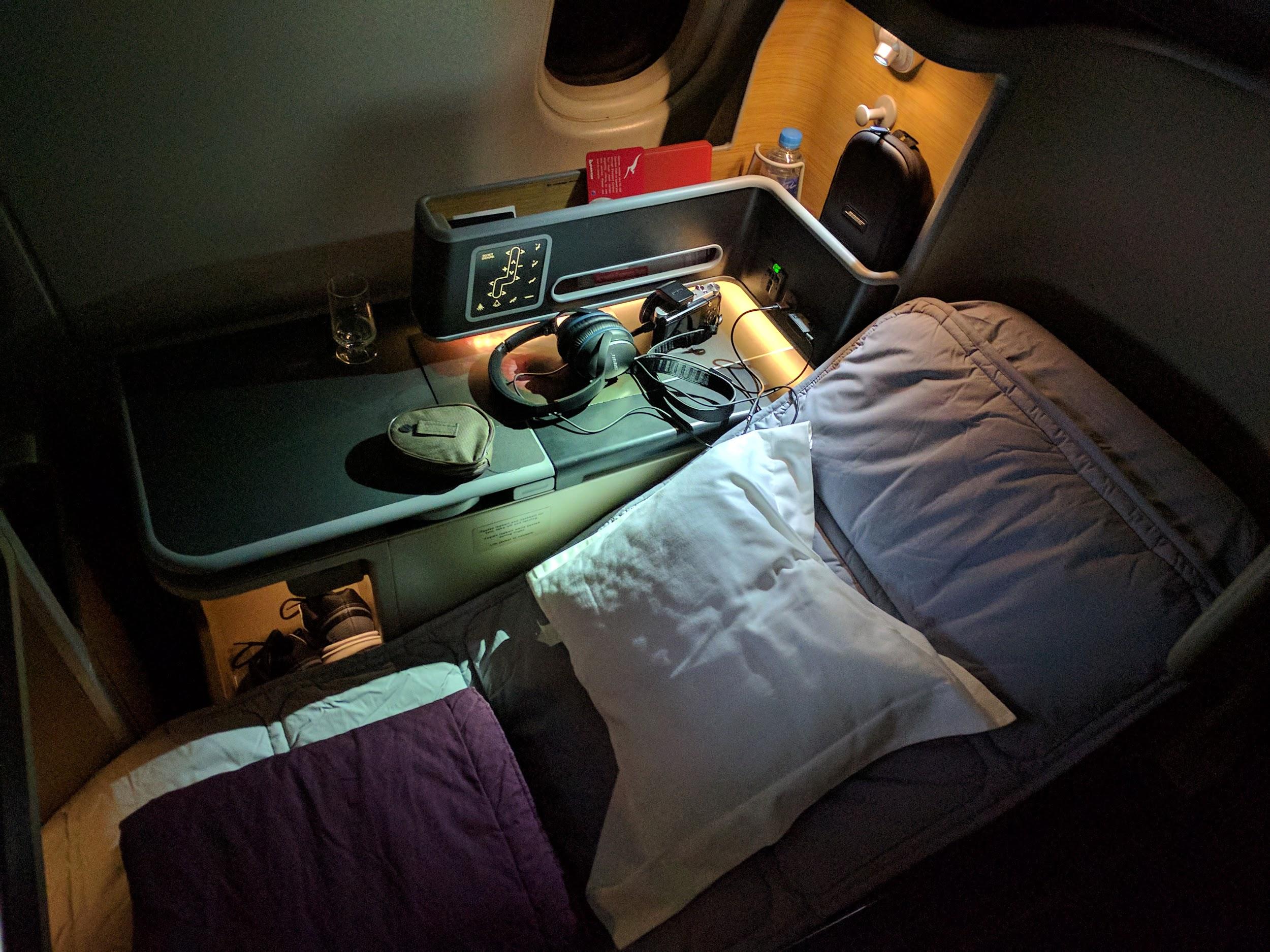 We were issued with a soft mattress pad which made the leather seat much more comfortable to sleep on. With the pillow and duvet, I managed to scrounge a few hours of much-needed rest in between the supper and breakfast services.

As we approached Auckland, the first rays of dawn signalled the end of our cross-country trans-Tasman flight. This is one of those times where I wished the flight was longer, so we could get more sleep! Even the comfort of Business Class is not much help when you’ve essentially lost the whole night to timezone changes. Having said that, I was very impressed with the level of service and amenities we received on this flight.

Despite it being only a little bit longer than a transcontinental flight, we were treated to an excellent main meal service and small breakfast, as well as the full range of amenity kits, sleepwear and bedding.

The Qantas Perth International Lounge experience could be better, but luckily for us Perthians, Qantas is building an all-new Perth International Premium Lounge in the new international T3 area for the upcoming Perth-London 787 service in 2018. Qantas’ Singapore and Auckland services will also depart from there.

Business Class fares for this flight are around $1170 AUD when on sale, which is also great value. Using 50,000 points is slightly less worth it, working out to be 2.34 cents per point. However, if you live in Perth and just want to redeem points for the quickest route available with the best service offerings, then you can’t go wrong with this.

Previous
How to earn Etihad Guest miles in New Zealand

Next
Need to make a minimum spend on a credit card for some bonus points? Here are some ideas