The research and booking of this flight should have been straightforward, but ultimately proved to be a royal pain. A one way Business Class flight at the lower Enrich miles level comes in at 34,000 Enrich miles. For myself and my travel companion, I initiated a transfer for the necessary miles from American Express over the phone with Amex.

These points were all earned from spend on my Platinum Edge, pretty much my favourite card / rewards scheme – more on that here.

Read our guide to the American Express Platinum Edge here

After a couple of days I started to get concerned – the miles hadn’t posted. I started by troubleshooting this from both the Malaysia Airlines and American Express side. After a fair bit of finger pointing, it came to light from the American Express side that the phone rep who originally registered my Malaysia Airlines account had forgotten to, or hadn’t realised they needed to, add the MH prefix in front of my Enrich Membership number in the Membership Rewards system. The points transfer had been made, but it was never going to work. My worst nightmare – with potential for lost points.

I was told I needed to wait for Malaysia Airlines to reject the transfer before American Express would be able to redo the transfer with the right details again. This took a couple of weeks in the end, after lots of phone calls and harassment – along with 5,000 MR points by way of apology. Not a bad outcome, but I was pretty concerned that the availability for the flights I wanted would dry up our travel dates were only 3-4 weeks away.

All was well that ended well – flights were eventually booked, and at 34,000 points and 633 MYR per person (around 200 AUD) for Business Class, an absolute steal. Qantas would charge 60,000 Qantas Frequent Flyer points for the Singapore – Sydney, admittedly a nicer product on their A380 – but not worth nearly double the points, in my opinion.

MH141 is a day flight, with scheduled departure of 9am, arriving into Sydney around 8.15pm. Given the departure time, we cut our arrival at the airport pretty fine and ended up with time only for the briefest look around the Malaysia Airlines lounge in Kuala Lumpur. It wasn’t massively impressive for the 5 minutes we spent there, but I’ll reserve judgement until I’ve explored more thoroughly another time.

After our 5 minutes in the lounge, we headed off to the gate to board, which was a smooth, simple process, and then settled into the angled-flat recliner seats on MAS’ ageing 777-200. It’s worth pointing out that I knew exactly what I was buying with my points for this journey. I knew that the MAS inflight product on their 777’s was inferior to Qantas, Cathay and Singapore Airlines – and that the IFE, seating and such was not going to be competitive. But, as I explained before, I was not concerned for the price I paid, and I was mentally comparing this redemption against Premium Economy (45,000 Qantas Frequent Flyer points) on Qantas from Singapore, or potentially an Economy redemption on Singapore Airlines through Krisflyer (25,000 Krisflyer miles). Given those comparison points, the Malaysia Airlines redemption was a no-brainer.

The Business Class cabin and seat was roomy enough, and certainly comfortable enough for a daytime flight. I probably wouldn’t have got a great sleep if travelling overnight, and the seat is less appealing to me than a Qantas Skybed MKI, found on QF’s unrefurbished 747’s and A330’s. After a standard pre-departure drinks service, we had three windows to enjoy the view when departing from Kuala Lumpur although the haze meant there wasn’t much to look at. The menu available on this flight looked like this:

After an hour or so we were served our brunch (main) meal, and I went for the Nasi Lemak. It was tasty enough, but nothing outstanding.

After a couple of hours of watching some IFE – which was old school, small screen, looped multi-channel entertainment – we hit the Australian coast. 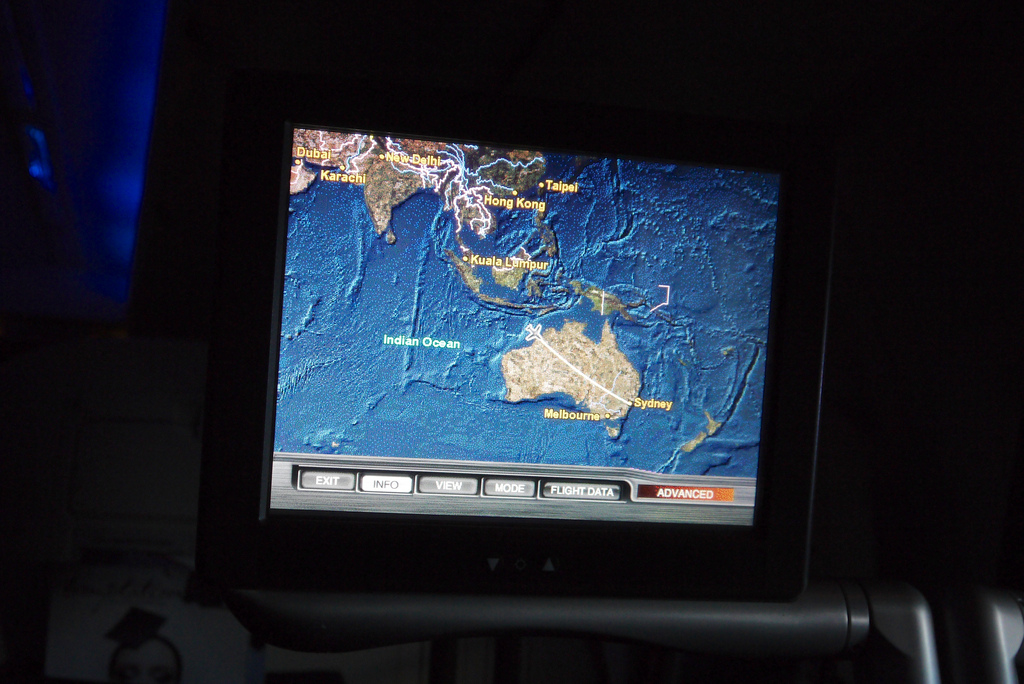 Another movie went by, and we popped open the windows somewhere over the middle of the Australian outback to be confronted with some of the most astonishing views I’ve ever seen from a plane. 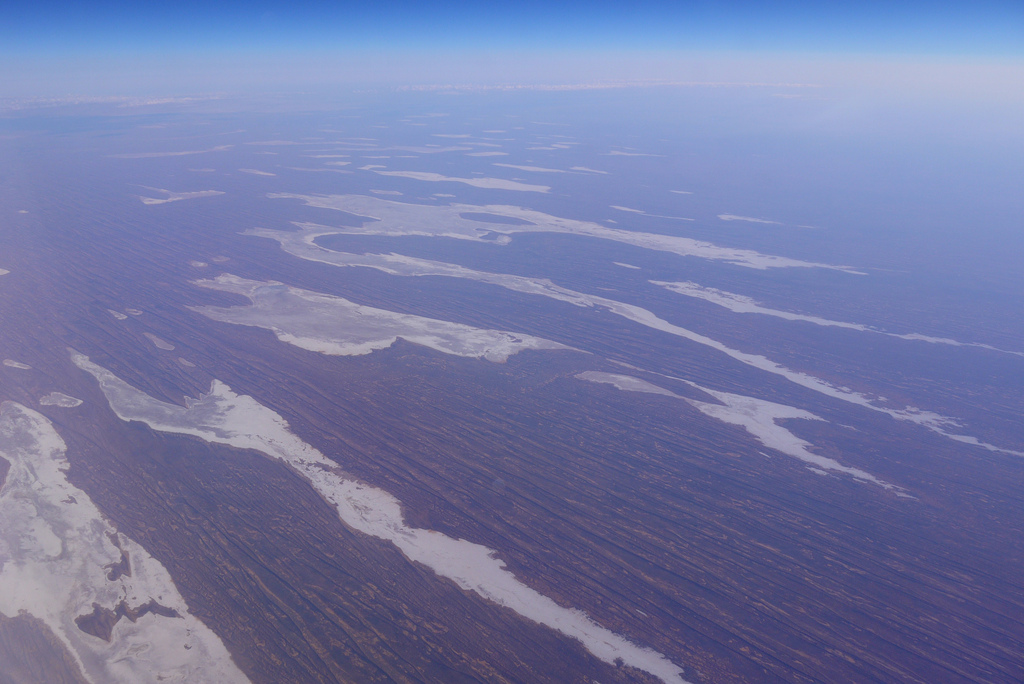 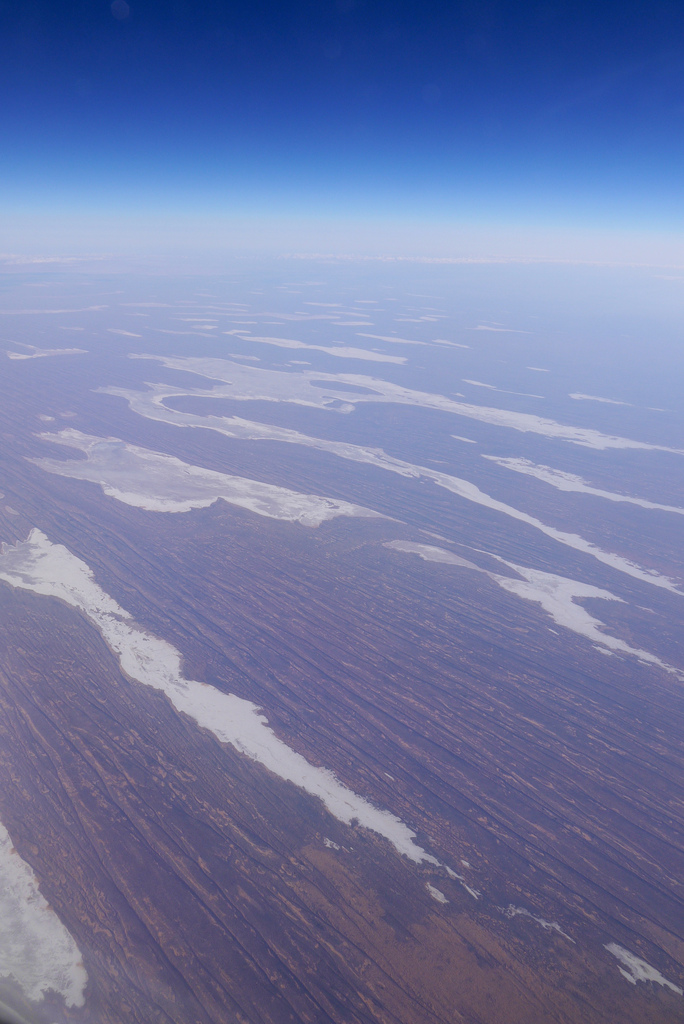 The refreshment service came around – Salmon Gravlax & Satay. Both tasty. Overall the food was fine, good flavours but just not enough – I was a bit hungry throughout. 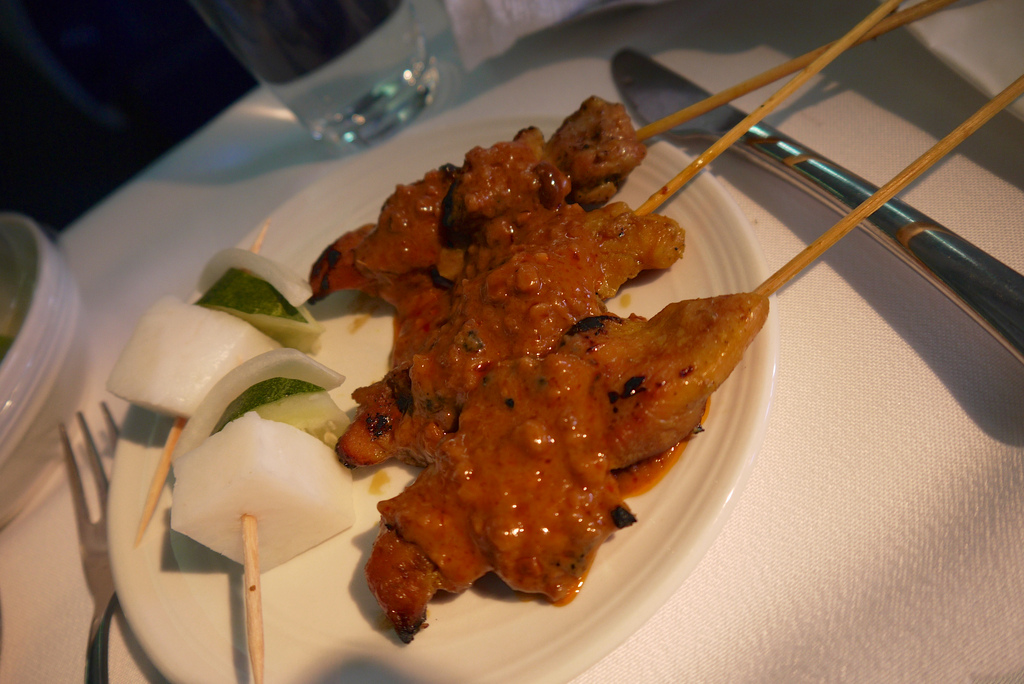 About an hour later we were making our way down to Sydney Airport for arrival. Our other Malaysia Airlines reviews

Read our review of the Malaysia Airlines A380 First Class here →

A perfectly comfortable way to travel – Malaysia Airlines old 777-200 flights are nothing special both in terms of service and inflight comfort. However, for the price in points, in can’t be beat – and you may find MAS also offering some very competitive paid fares around Asia and into Europe as well, which have been surfacing recently.

Given Malaysia Airlines are now deploying their new A380 and A330’s on routes to Australia (the A330’s) and Europe (the A380 for Paris & London), redemption opportunities on MAS will become even more attractive for Australian travellers. The A380’s are fitted with lie-flat seating, the A330’s with a new angled-flat product. Combine this, Enrich’s cheap redemptions on their own flights, and their new membership of oneworld so anyone with Qantas elite status has their perks recognised, and MAS flights become a truly attractive use of your points.