The last leg on our European trip was to head from Paris Charles de Gaulle, to Kuala Lumpur, and onto Sydney in Malaysia Airlines Business Class – once again with the two kids in tow, aged 3 and around 4 months.

As I’ve mentioned a few times before, Malaysia Airlines Enrich program can provide excellent value for your points when booking on Malaysia Airlines flights, and has a few Australian credit card program transfer partners to get your points over to Enrich for redemption. This flight is a great example, coming in at only 51,000 Enrich miles, one way.

Featured Malaysia Airlines A380 picture by Simon Clancy at Flickr

I knew when setting up all the bookings for this trip mid last year that Malaysia Airlines would probably be in the mix somewhere for that reason – in comparison to other programs, 52,000 miles for a one way Business Class redemption is amazing value, with Qantas, Asia Miles and many other programs charging double that in pure mileage terms.

Malaysia Airlines also usually has good award seat availability to take advantage of, so when I did the research for the trip and I saw that there were enough seats for the 3 of us (plus infant), I snapped them up.

Booking an infant ticket using Enrich miles is a little tricky, without the ability to do this online on Malaysia Airlines website. You have to call the Enrich call centre where they will manually calculate the fare and taxes involved.

Unfortunately all taxes and surcharges are payable with Enrich bookings, with a per adult cost of around $400 AUD. Infants are charged as no points, but 10% of the adult fare – in this case a total of $495 AUD. It’s still a great value use of points in my book.

The check in at Charles de Gaulle was relatively easy, after jumping off the bus from the overnight stay at the Hilton the night before. All of our bags were tagged fully through to Sydney with priority tags, friendly service, and then we promptly got a bit lost in the Charles de Gaulle maze.

After taking our time through check in, security and that left minimal time in the lounge. However, we really didn’t miss much – the Air France operated lounge we had access to was empty, of both people and any kind of reason for being there. 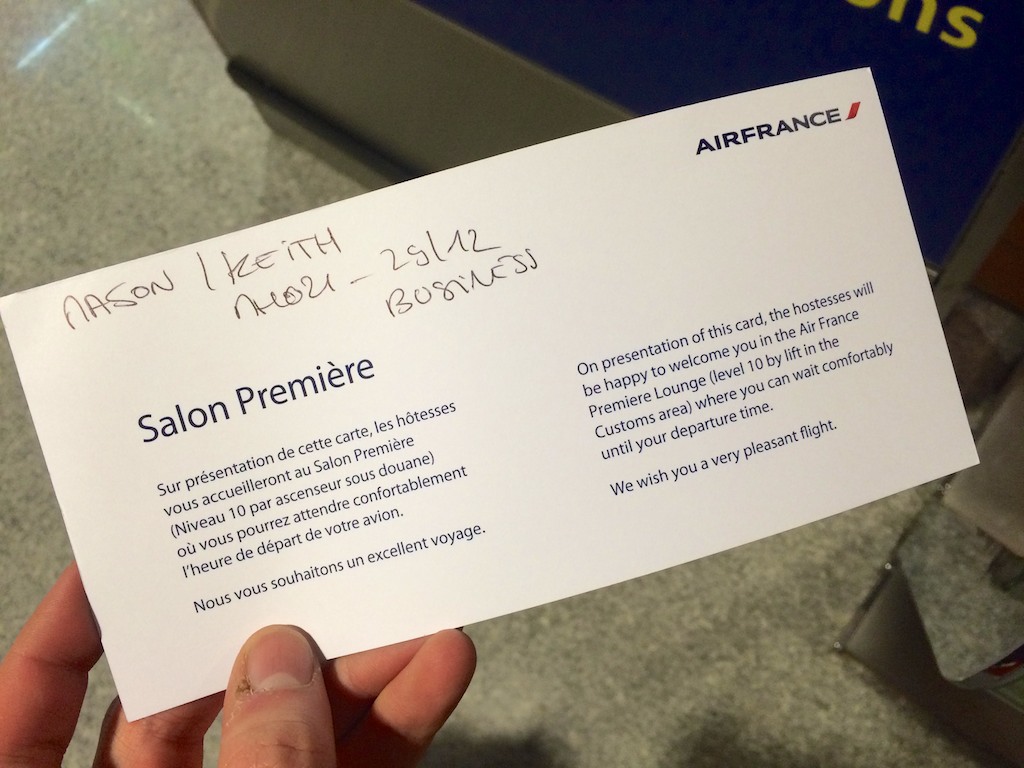 So we wandered off to board the flight, again experiencing the architecturally ‘different’ place that is Charles de Gaulle. Boarding was very straightforward, and our little family unit got a great welcome by the Malaysia Airlines staff. The midday departure meant that noone was too tired on getting on board, so the kids coped very well with the departure process and getting up in the air. The seat itself is comfortable, both in sitting and in fully flat mode, and I slept for maybe 4 or 5 hours in total on the flight – which considering the 2 small children is no small-feat. It’s also testament to how awesome my other half is in looking after our youngest! Our 3 year old got at least 6 hours sleep lying flat too. With an infant in tow, we were placed in bulkhead seats with a bassinet located immediately in front of us. This took a couple of phone calls to arrange, but we got a decent amount of space with two seats on the left hand side of the aircraft, and then one in the centre with the bassinet. This also gave us a good amount of storage with the window storage bins available to use. This is really the only significant personal storage available for Business Class customers outside the overhead bins, again very similar to Qantas configuration. 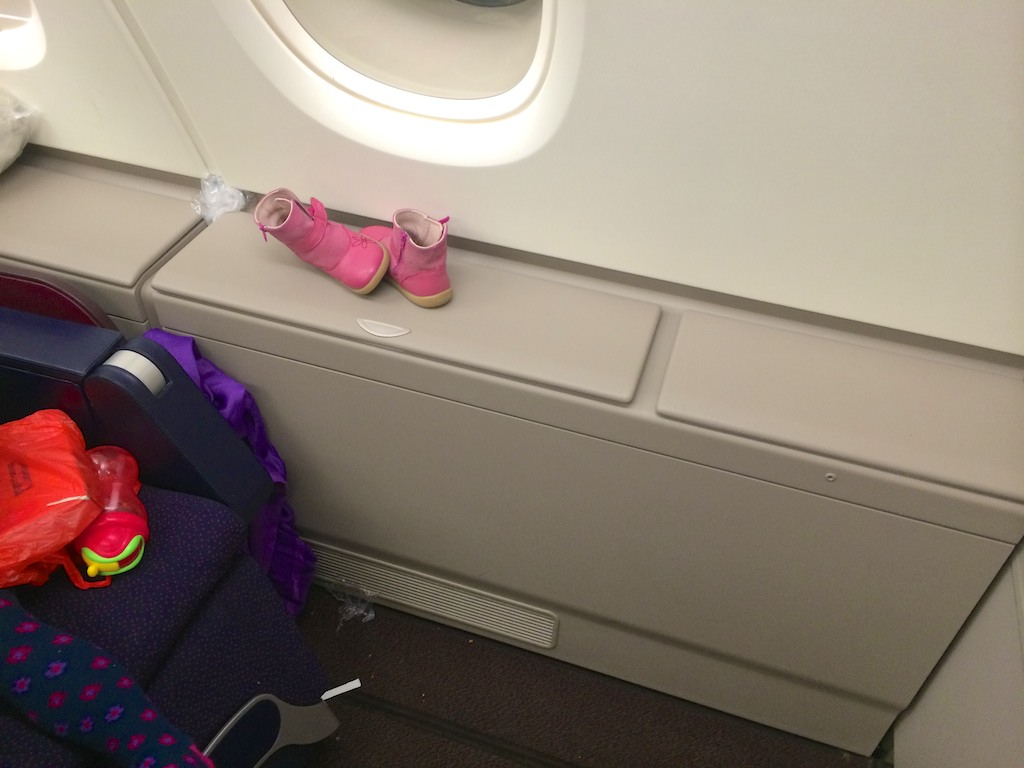 The Upper Deck is almost fully dedicated to Business Class, with the exception of maybe 25% of the rear Upper Deck allocated to Economy seating. I managed to grab a copy of the menu for this flight, below.

As a general comment, the food was pretty good, with decent size servings of ‘good enough’ quality. There were no misses in the food I had presented to me, so no complaints – but it wasn’t up there with the world’s best or other Business Class meals that I’ve had. 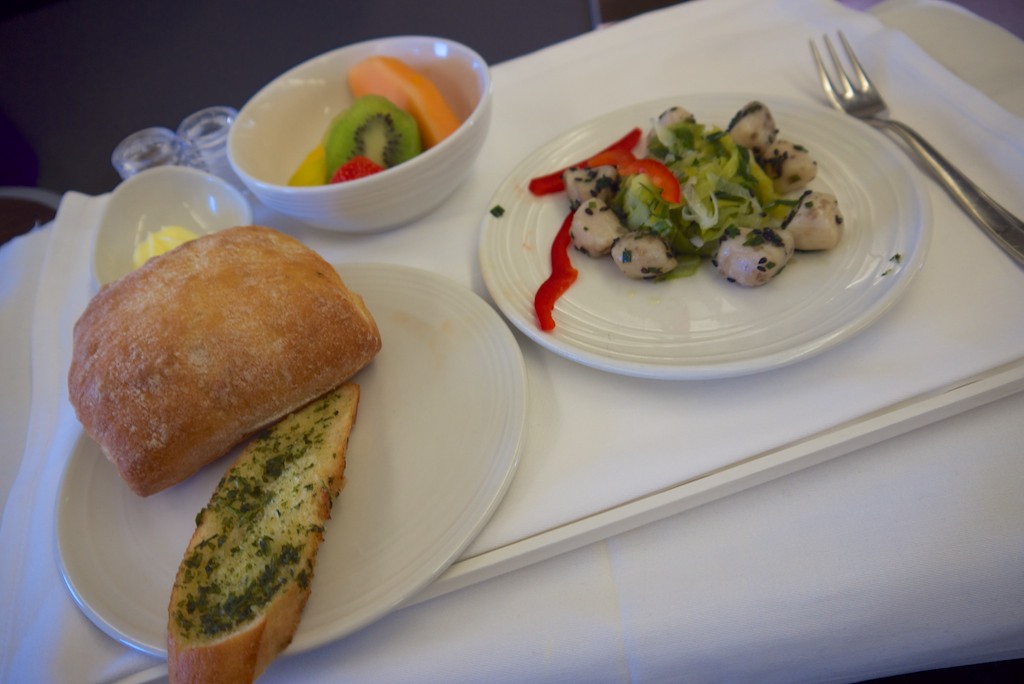 Dinner – I can’t remember what this was! Snacks available in the galley

All up, this flight went well, considering. The crew were simply excellent, to be honest – very friendly and talkative with our children, and attentive on request for anything we needed.

The A380’s size comes in handy when trying to deal with children, allowing you to stand up and hang out in some of the open space in the galley and get them to sleep, for example. This flight was no different, the space made a big difference to everyone’s comfort and sanity. 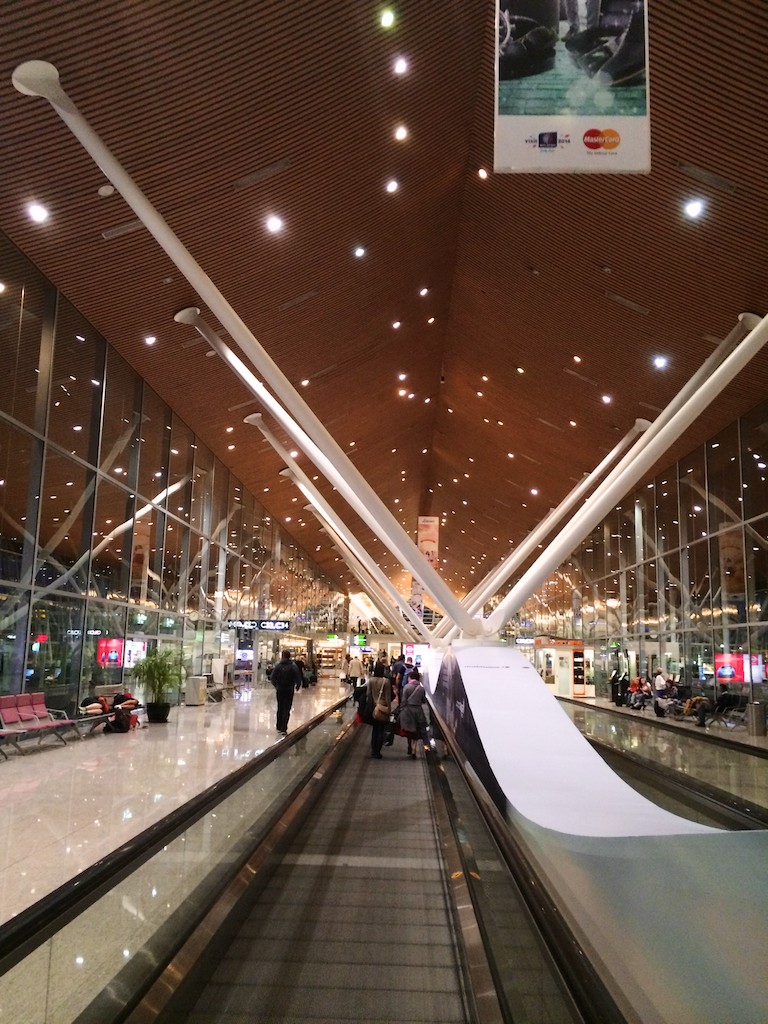 The visit to the Golden Wing satellite lounge was possibly one of the most surprising parts about this journey. After 10+ hours in the air, with a 2 hour layover and another 8 hour flight in front of you, the last thing 2 kids need is to be told how to behave in an adult environment. They’ve just spent all that time in a box where adults rule the world, so letting off a little steam is important.

The Golden Wing Lounge by itself was nothing special – there was an amply supply of food, drink and seating, but the views of the tarmac were blocked by condensation. 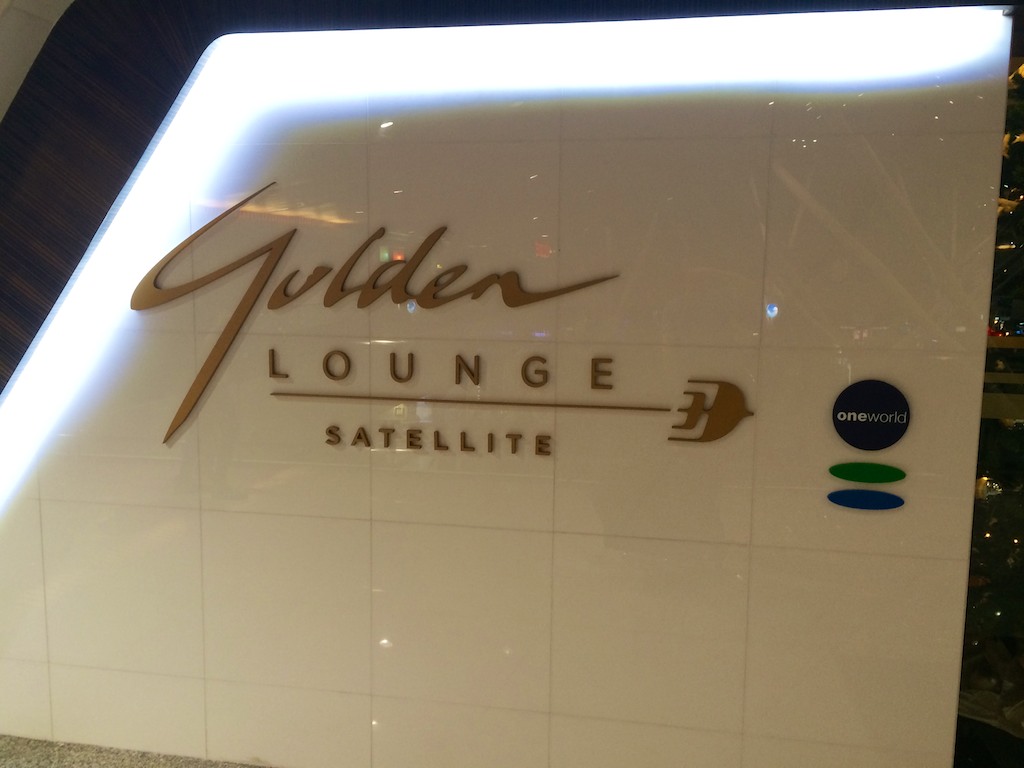 However it was the kids room that made this layover a pleasure. With a couple of adult seats for you to watch on, toys, a chalkboard, hidey-house, kids seating, books and even a small side room with a cot, this was an excellent way for kids to go into their own headspace for an hour or so. The room itself wasn’t that large, but the fact it was behind closed doors made a difference to adult sanity on both sides.

The lounge itself had plenty of empty seats and space, and a bar area (closed, given the time of day). After hanging out in the lounge as long as we could for the kids, we headed off to our gate for the second flight to Sydney. By this point we were all exhausted so taking pictures took a back-seat, unfortunately.

The crew again were excellent, extremely friendly and helpful to our travelling family’s needs, and chatty when talked to – which helps the time to pass when you need it to.

I knew going into this flight that we would be on Malaysia Airlines newest configuration A330, with an improved seat and entertainment offering to their 777 which I had flown in 2012 on the same flight.

I also knew that the seat wasn’t that much better – still angled-flat only. But I had hoped it would be an improvement, and that we’d be able to get a bit more sleep. In reality, it wasn’t a great seat for sleeping on. Our 3 year old slept well, but kept sliding down the seat to the footwell due to the angle. I had to prop myself up using some pillows under my feet, but eventually dozed off in the end. 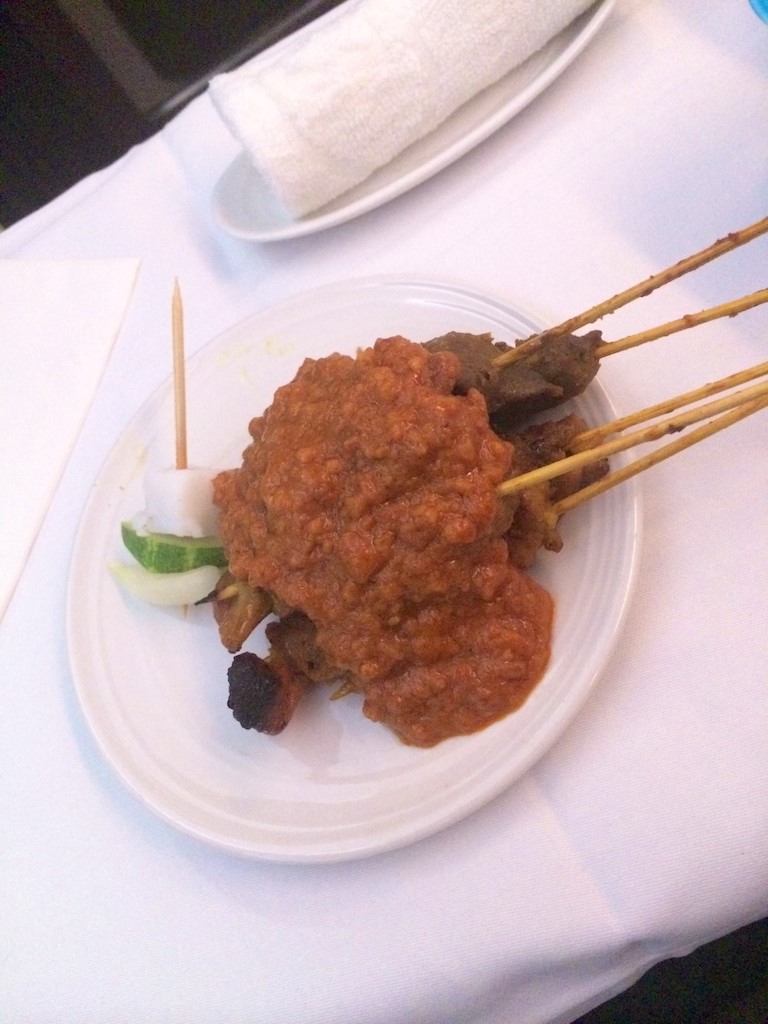 On the food front, everything was fine. I remember I ate a lot of very tasty Satay. Everything else was a jet-lagged blur. And finally, 23 hours after leaving Paris, we began our descent into Sydney, landing around 8pm before making our car trip home.

Our other Malaysia Airlines reviews

Read our review of the Malaysia Airlines A380 First Class here → Read our review of the Malaysia Airlines 777 Business Class here →

As I set out at the beginning of this review, I knew what I was getting into when I booked this flight. My criteria for success were pretty simple – enough space for a family of 4 to travel for 23 hours straight to get home from Europe.

The key win about the Malaysia Airlines Enrich redemption was, of course, the price. However their A380 cabin pleasantly surprised me in it’s comfort and simplicity – it’s no Cathay Pacific Business Class, but it absolutely did the job.

Their A380’s operate on the London and Paris routes, so are absolutely worth looking out for, and the flight times and short transit in Kuala Lumpur make for a sub-23 hour journey between Sydney and Paris, which is pretty appealing.

The cabin crew at all points in our journey were simply stellar. Exceedingly helpful, responding to every request, and conversing with us and our children in a truly friendly way. I couldn’t have asked for more.

The main disappointment, but one that didn’t surprise me, was the comfort of the seating on the A330. I had hoped for improvements on their 777 seat, but there was nothing significant beyond the entertainment system.

Redemptions on Malaysia Airlines using Enrich miles are still one of my favourite best value uses of points out there, especially when trying to get multiple people to or from Europe in comfort.

Next
British Airways 777 Club World Business Class Review – BA16/BA15 Sydney to Singapore to London, and back