In early 2016, myself and a group of classmates decided to take a trip to Japan toward the end of the year. I was inspired by Point Hacks to use Qantas Points to build an interesting itinerary and enjoy our first ever international business class flights – and this is the first of a few reviews of our trip.

While Jetstar’s 787 Business Class cabin isn’t the most glamorous out there, it did the job and transported us from Australia to Japan in relative comfort.

Due to the difficulty of booking award flights for six people on one itinerary, my partner and I booked ourselves on a separate itinerary to our other four friends. We flew on different connecting flights, but our whole group managed to fly to our final destination together.

We are based in Perth, so that was the start of our itinerary. From Perth to Osaka, we considered numerous options, including Cathay Pacific Premium Economy for 63,000 Qantas Points. However due to a lack of seats for all six of us, we eventually settled on our second choice – Jetstar flights from Perth to Osaka, via Cairns. As part of booking with Qantas Points, we automatically received a 20 kg baggage allowance (30kg for business). There was plenty of availability booking 8 months out – more than 6 seats in both economy and business class.

A few months later, JQ15 was retimed to 1pm, giving us more time to get to Cairns. I decided to tweak our domestic connection to go the long way – so we flew Perth – Sydney – Cairns in Qantas Business Class, so we could enjoy a more comfortable overnight flight. This won’t be covered in the review, but both flights were great overall and worth the extra 26,400 Qantas Points per person. Kicking off our overnight transcontinental trek with the Qantas Business Suite

We had previously checked in for this flight at Perth, with Qantas issuing all three boarding passes and tagging our luggage straight to Osaka – this is a benefit of using Qantas domestic to Jetstar international connections. Jetstar won’t transfer baggage between their own domestic and international flights, as my other friends later experienced. Flying to Japan the long way

Upon arriving in Cairns the next day, we head to the Cairns Qantas Club lounge to meet up with our friends, who had arrived earlier on the direct JQ flight and was waiting out the 5 hr transit there. Ordinarily we wouldn’t have had access (only JQ max fares include lounge access), but my Qantas Club membership got us in.

Soon we walked to the international terminal, where our friends had to re-check their bags in. Unfortunately for them, it seemed 99% of the passengers were Japanese schoolkids, and they were all lining up to check in! There was one business counter set up which was empty, so I walked over to confirm my own check-in, and ask if my friends could check in there to save time. Unfortunately, they couldn’t, so we waited about 30 minutes for the line to clear.

Since there was no lounge access airside in the international terminal without a Business Max fare, we just waited around the gate until it was time for boarding. There was no priority boarding lane, though business guests were invited to wait around the front to board earlier.

We had reserved bulkhead seats 1A and 1C. The Jetstar 787 business seat is 99% identical to the Qantas 737 Business Class seat, right down to the cocktail table design, and useless leg rest. There are three rows in a 2-3-2 configuration. To be honest, with the bulkhead in front of us, it felt no different to an economy exit row seat. 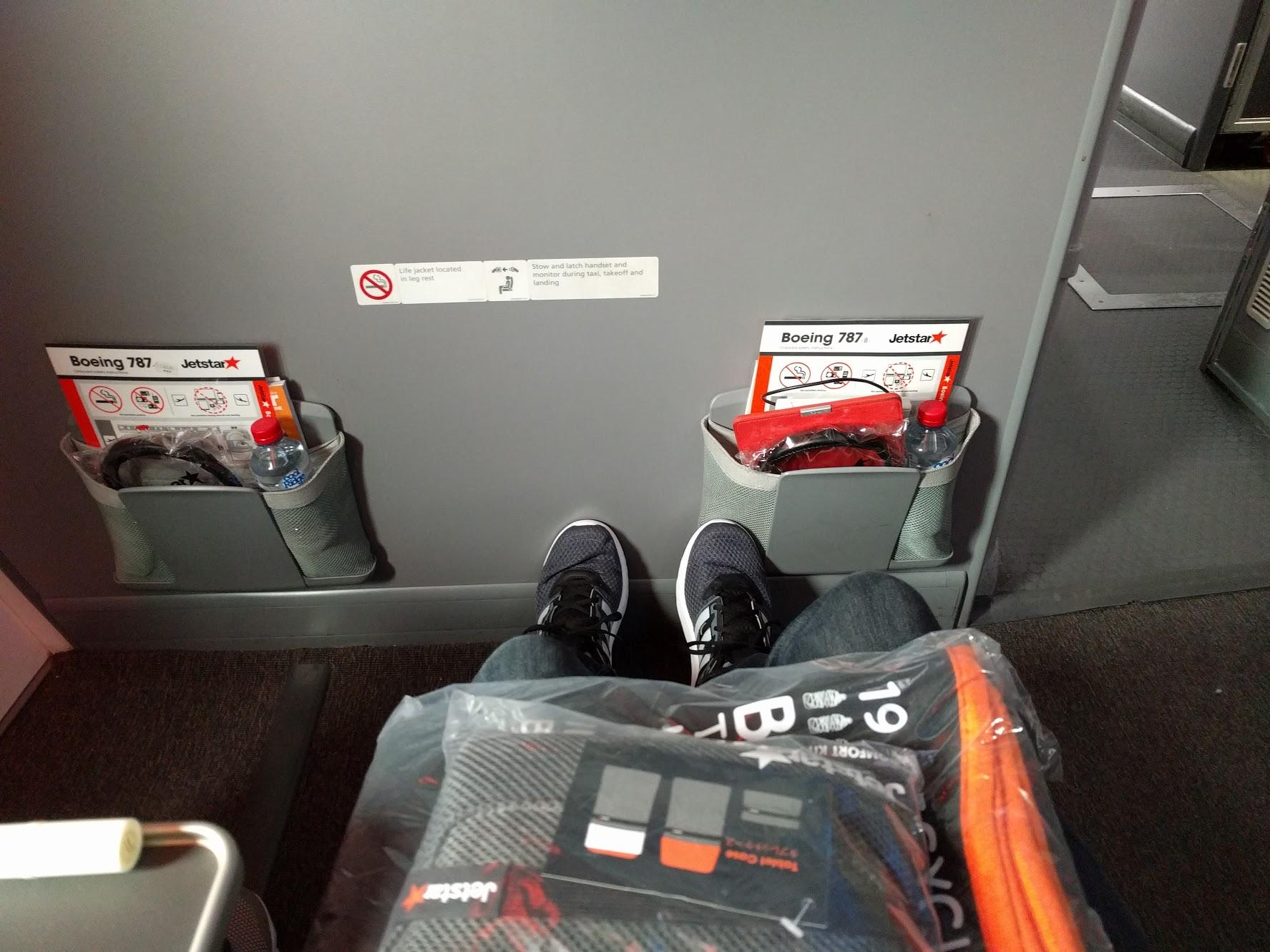 Legroom around 1A and 1C

With bulkhead seats, the IFE screen is mounted on an arm and not accessible during take-off and landing. Despite that, I prefer this option as you get more flexibility with adjusting the position of the screen. There was a small but adequate selection of new-release movies and TV shows, which saw us through most of the flight.

Blankets and amenity kits were given out, which came in a nifty pouch that could also be a tablet holder. Amenity kit and the ecothread blanket, made out of ‘19 recycled plastic bottles’.

Apart from the usual toothbrush and eye mask, it came with an inflatable neck pillow and a nice set of Zenology lip balm + hand balm. 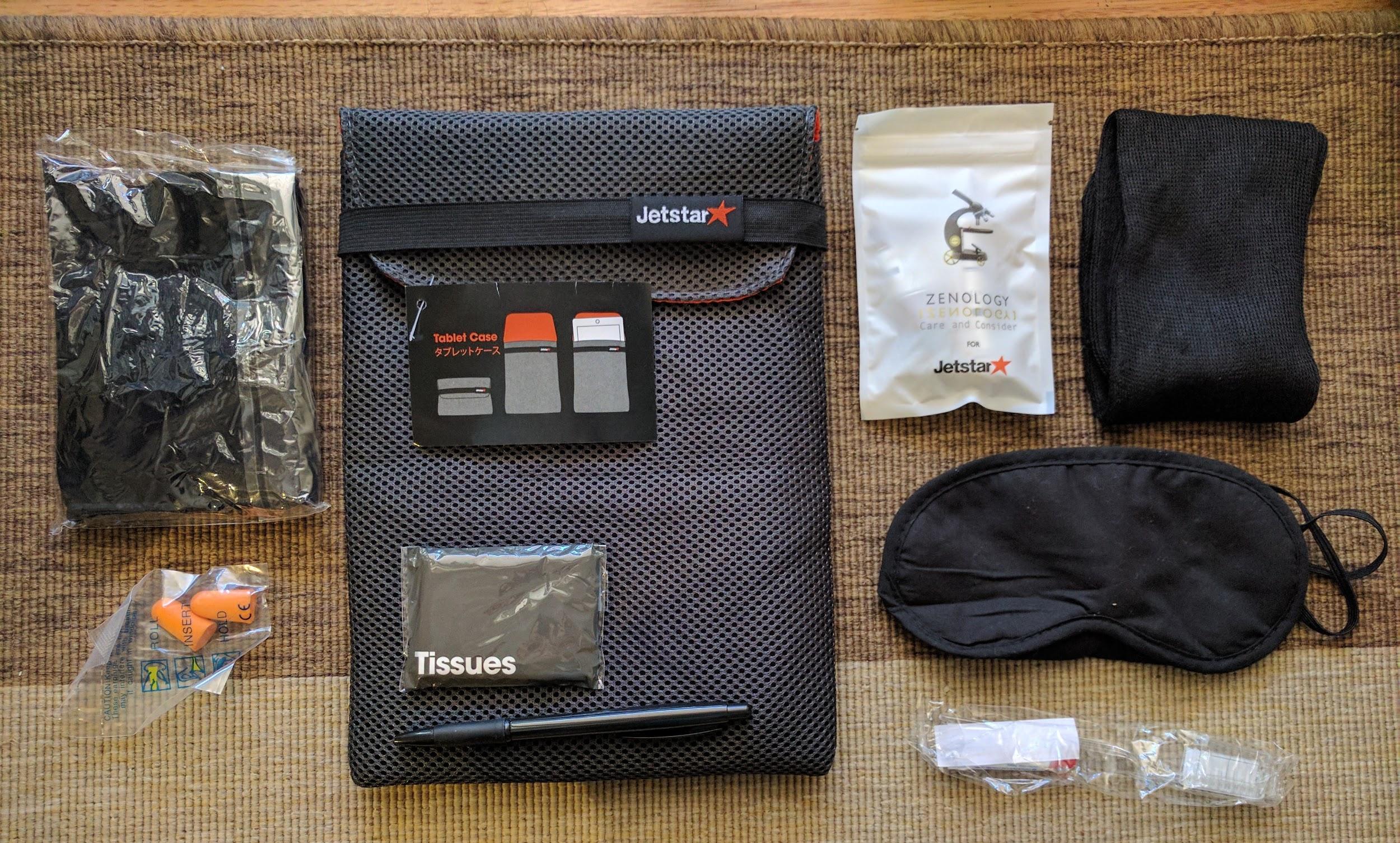 Menus were distributed and when the doors were closed, Business Class was 100% full. As JQ15 was a daytime flight, we would be served lunch after take-off, and afternoon tea before arrival. Menu for our flight on the left, incorrectly labelled as ‘Tokyo’

The service on Jetstar is essentially similar to Qantas 737 domestic Business Class. That being said, it is a definite step up from catering in premium cabins of low cost carriers. Lunch was presented on the one tray, but real glassware and cutlery was used.

We didn’t get a choice for entree, with the grilled zucchini and smoked salmon being automatically served up. For mains, I opted for the roasted lamb rump which was pretty good. My partner decided on the chicken karaage. As expected, the coating was soggy, but the chicken was still succulent and went well with the rice and vegetables. For dessert, we chose one each of the cheese plate and raspberry tart. Both were a decent way to finish off lunch. About 90 minutes prior to landing, a snack was served. We both chose the chicken croquette, which was oily but satisfying. 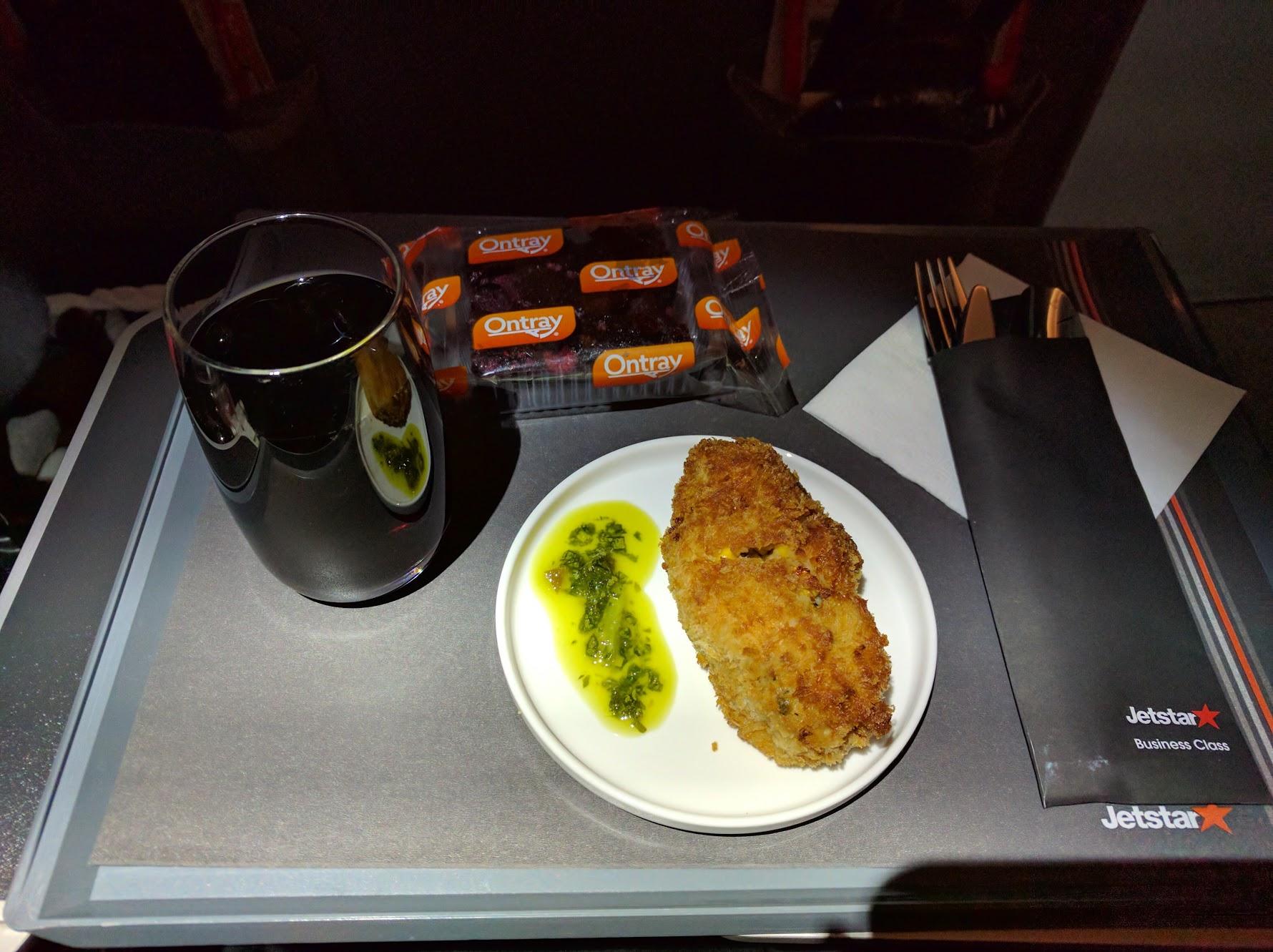 The raspberry brownie dessert came pre-packed and we decided to save it for later (a smart decision as it turned out, as we were hungry on the train ride out of the airport).

Summing up – Cairns to Osaka in Jetstar 787 Business Class

Overall, our Jetstar 787 experience was just fine. The staff were friendly and did a great job with the little things, such as remembering our names and proactively topping up drinks. While the Business Class seats are nothing to write home about, the service and food in Business Class is sufficiently different to distinguish it from Economy.

With one way fares starting around AU$900, if you valued the comfort it would be OK value when paying cash. That said, in the future I personally wouldn’t choose to book it with points over Economy again.