With Qantas’ partnership with Emirates, an ongoing and useful provider of benefits to points-collectors, redeemers and frequent flyers, Emirates First Class has become one of the most useful and unique ways to use your Qantas Points.

I’ve had the chance to sample Emirates top premium cabin a few times in the last year, so here is my take on how to get the most from your trip.

Later in this overview, we cover off the various ways to redeem your points to travel in Emirates First Class, with the key opportunity for New Zealand travellers being their Qantas Points balances.

About 40% of all Emirates planes are A380s, so there is a good chance that you will be travelling on one of these if you are flying long-haul and/or to or from a major airport.

As of August 2017, the following routes from New Zealand are serviced by the A380 (and indicated on the below map in white):

and these routes are flown by the smaller Boeing 777-300ER, indicated on the above map in red:

The advantages of the A380 First Class cabin are an onboard shower and bar; the advantage of the 777 is that having almost half of the First Class seats means service is generally more attentive.

You can also expect the A380 on (most or some) flight to major airports from Dubai such as:

You can check if your flight is on an A380 or different aircraft through Google Flights or SeatGuru.

There are three versions of the A380: two have 14 First Class Suites and are the most common but on some routes First Class is cut to make room for more Economy seats (557 to be exact!).

The First Class cabin is located on the upper deck at the front of the plane, with 14 closed suites in a 1-2-1 configuration and no overhead bins.

Emirates delivers on the promise of ‘bling’ in their First Cabin, trimmed in wood, gold accents and orchids at every seat. Each suite has closing doors and its own lighting surrounding your seat/bed.

There’s also a small mini-bar (which is relatively pointless, in my opinion!) and lit vanity mirror:

When you’re ready, just ask the crew to turn down your seat into a bed and you’ll find a mattress pad, quilt and sheets laid out on your return ready for rest:

Passengers travelling with a companion may prefer the centre seats (1E and 1F, 2E and 2F, or 3E and 3F) with the retractable privacy divider, whilst solo travellers will probably want to opt for the window seats (A and K in any row).

If you had the choice, I’d recommend avoiding rows 1 and 4 to cushion against noise and foot traffic from the two shower suites/bathrooms in front and one bathroom and galley behind.

Each seat offers charging for your USB devices, copious amounts of storage for your belongings, and many ways to customise the lighting and seat recline for your own taste.

There are no overhead lockers in the cabin, which maximises headroom, so your carry-on luggage fits under the small bench seat/footrest in front of you.

And just in case you need to channel your inner Hemingway in flight, there’s a dedicated writing kit in each seat.

The main difference to Business Class (and especially Economy) is the vast screen you get in First, which is so far away from your seat it’s almost impossible to reach. This is where the small touch screen controller next to your seat helps.

There are two USB chargers and a range of air vents you can tweak to keep yourself cool.

Each seat comes with a full plug you can use to charge your laptop, camera or other devices that USB can’t handle.

Of course, the dining and drinking is where Emirates First Class really differentiates itself to travelling in Business Class. First, there’s the snack basket which remains by your side for the whole flight (except duringtake-off and landing.)

Then it is full à-la-carte, on-demand dining.

Choose any dish, any time you like. This is actually part of the challenge of travelling in First – you need to think about what you’d like to eat, and when, and plan accordingly. It is otherwise tempting to either eat at the wrong time or order too much or too little.

Located at the back end of the upper deck behind the Business Class cabin is the bar, which is a great ‘escape’ – or change, at least – from the privacy and relative isolation of your First Class seat. Here you can chat with fellow passengers from Business or First Class and order a drink or collect a couple of canapés.

The most unique aspect of the Emirates A380, in my opinion, is the ability to have a shower on-board as a First Class passenger. It is an amazing way to refresh yourself mid-flight or upon waking.

Each passenger receives five minutes of hot water, which you can stop and start as you see fit, and up to about 30 minutes in the shower/bathroom, which is so vast that you could take lay down and take a nap (not advisable though.)

There are two shower suites at front of cabin and it is advisable to make an appointment with the cabin crew if you know when you’d like a shower and the cabin is relatively full. If not, don’t stress and just go when it makes most sense for your journey.

If you’re on a one-stop flight to somewhere via Dubai, then that means two showers, one for each flight. I don’t think I’ve ever arrived at a destination so clean, to be honest.

Read our guide to airlines with onboard showers

On both ends of your trip, First and Business Class passengers are eligible to be driven to and from the airport through the complimentary limousine service.

While this service is not available when travelling on Emirates flights exclusively between New Zealand and Australia, for other Emirates-marketed and -operated flights departing New Zealand and connecting through to Asia or to Dubai (direct, or with a layover in Australia), you can access this service, calculated by actual kilometres driven:

Each service will accept two adults and two suitcases only. If you are travelling with other passengers, it may be wise to split into two cars.

Each destination has a different rule, including:

You can book the service through Manage Your Booking.

By collecting Qantas Points, you can redeem them for one of the less ‘available’ redemptions out there.

Emirates don’t partner with many frequent flyer programs and are not part of a formal alliance like oneworld, so Qantas Points are one of the key currencies with which you can book Emirates flights.

Note that redemptions on Emirates (a ‘preferred’ Qantas partner) are cheaper than on airlines like Qatar Airways, Cathay Pacific and British Airways.

Here is a sample of the points required for common routes:

^ Over the mileage limit, splits into two redemptions.

If you are wanting a stopover of 24 hours or more, perhaps in Dubai or a transit city like Sydney, Bangkok or Singapore, you’ll have to make two separate award redemptions.

You can search and book easily on qantas.com, with full instructions in the guide below:

A less-common but good-value way to make an Emirates redemption is by buying Starpoints from Starwood Preferred Guest and transferring them to Japan Airlines Mileage Bank.

As an Emirates First Class passenger, you’ll get access to any Emirates Lounge in Dubai or around the world.

Here are our recommendations for common airports:

Here is a full list of Emirates, Qantas and other partner lounges.

Here are our reviews of Emirates flights:

and competing products from other airlines to Middle East and Europe:

Read our review of Etihad A380 First Class Apartments here

Read our review of Etihad A380 Business Class Studios here

Read our review of Qatar Airways A380 First Class here 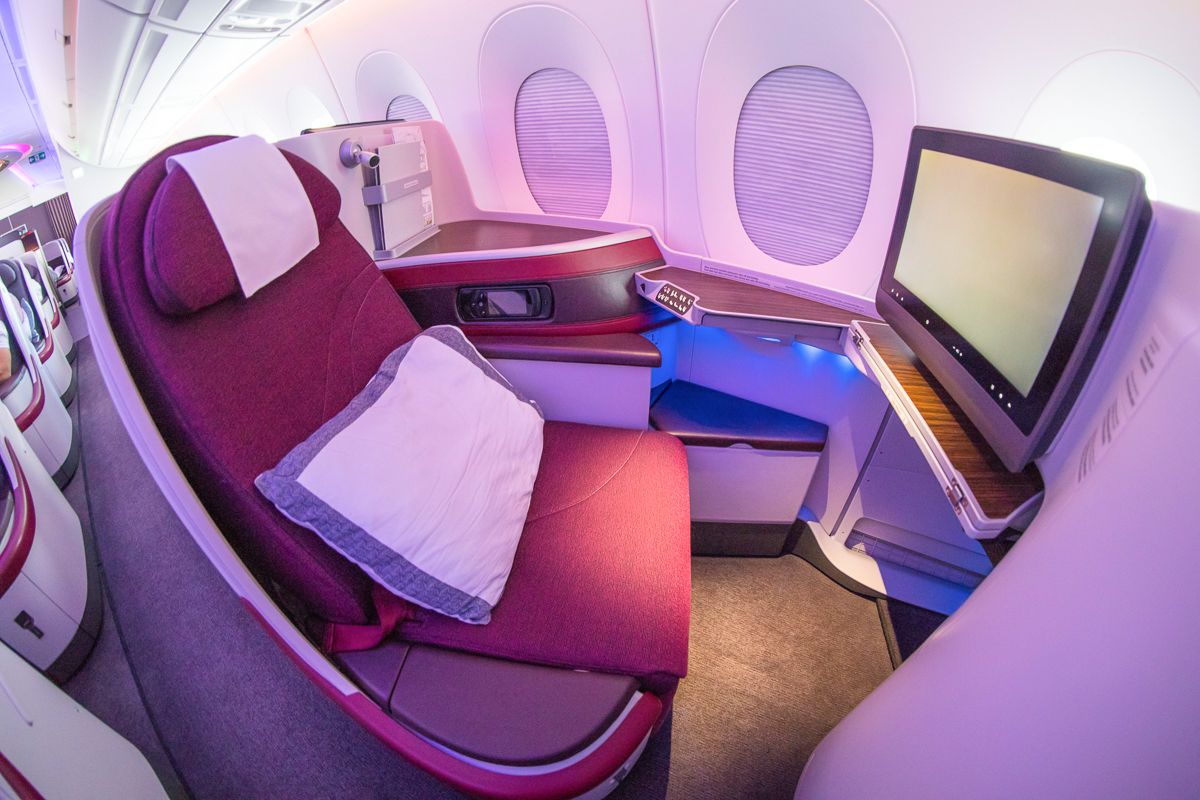 Read our review of Qatar Airways A350 Business Class here

Emirates First Class is ideal for anyone with a growing Qantas Point balance who spies points redemption availability and can justify spending more points on the First Class experience.

I’d argue it’s a totally luxurious, but unnecessary way to travel vs Business with everything else about your itinerary being equal. For most people, Emirates Business Class would be a great experience, with thousands of points saved.

However, sometimes only First Class is available for points redemptions, or if your points balances need using up, then why not?

There is nothing I would criticise about Emirates A380 First Class. The cabin is not necessarily to my (and many others’) taste but you can’t argue with the comfort, dining and service on offer, and the fact that we can redeem Qantas Points for Emirates flights – one of the few currencies that make this possible – makes it a key way to use up your Qantas Points balances.

Which airlines fly the Airbus A380 to New Zealand?

Read the guide here
Emirates A380 First Class overview: one of the better and most unique uses of Qantas Points was last modified: November 17th, 2019 by Daniel Kinnoch