Qatar Airways is a great option to target using Asia Miles, Qantas Points and AAdvantage miles, and will become an even more attractive prospect with the introduction of its updated Business Class product from mid-2017.

Qatar Airways has unveiled a long-awaited upgrade to its Business Class product at the travel trade show ITB Berlin this week.

With the intelligent slogan ‘First in Business’ – referring to a product which really combines elements of both a First and Business Class seat – the Qsuite will feature sliding privacy doors, much like you can currently experience in Singapore Airlines and Emirates First Class Suites as well as on Korean Air’s Boeing 747-8i aircraft. The two middle seats will convert into a double bed, again just like in Singapore Airlines First Class Suites. 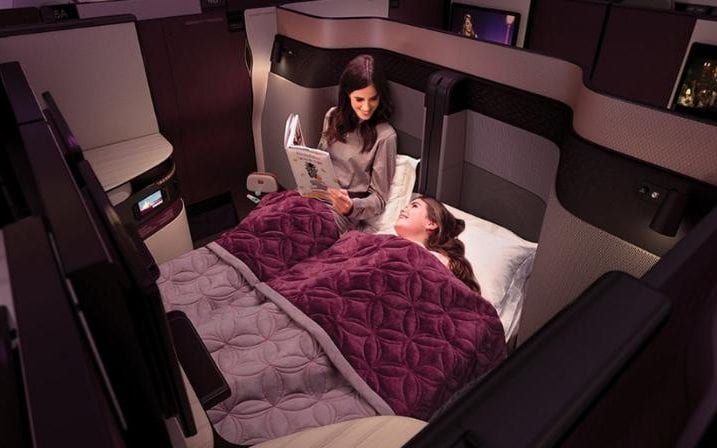 And there will be removable row dividers in the middle row to convert four adjacent middle seats into a family room. As we see it, the pros are:

The cons could be:

Which routes will be the first to feature the Qsuite?

Then you can expect routes to be serviced by the new A350-1000 (of which Qatar is the launch customer) next, as well as a retrofit of Qatar’s Boeing 777 (servicing Auckland) – that’s good news for travellers from New Zealand.

The Boeing 777 is in dire need of an upgrade, and given Auckland – Doha is now the world’s longest flight route, it couldn’t come sooner!

What to expect from Qatar Airways Business Class 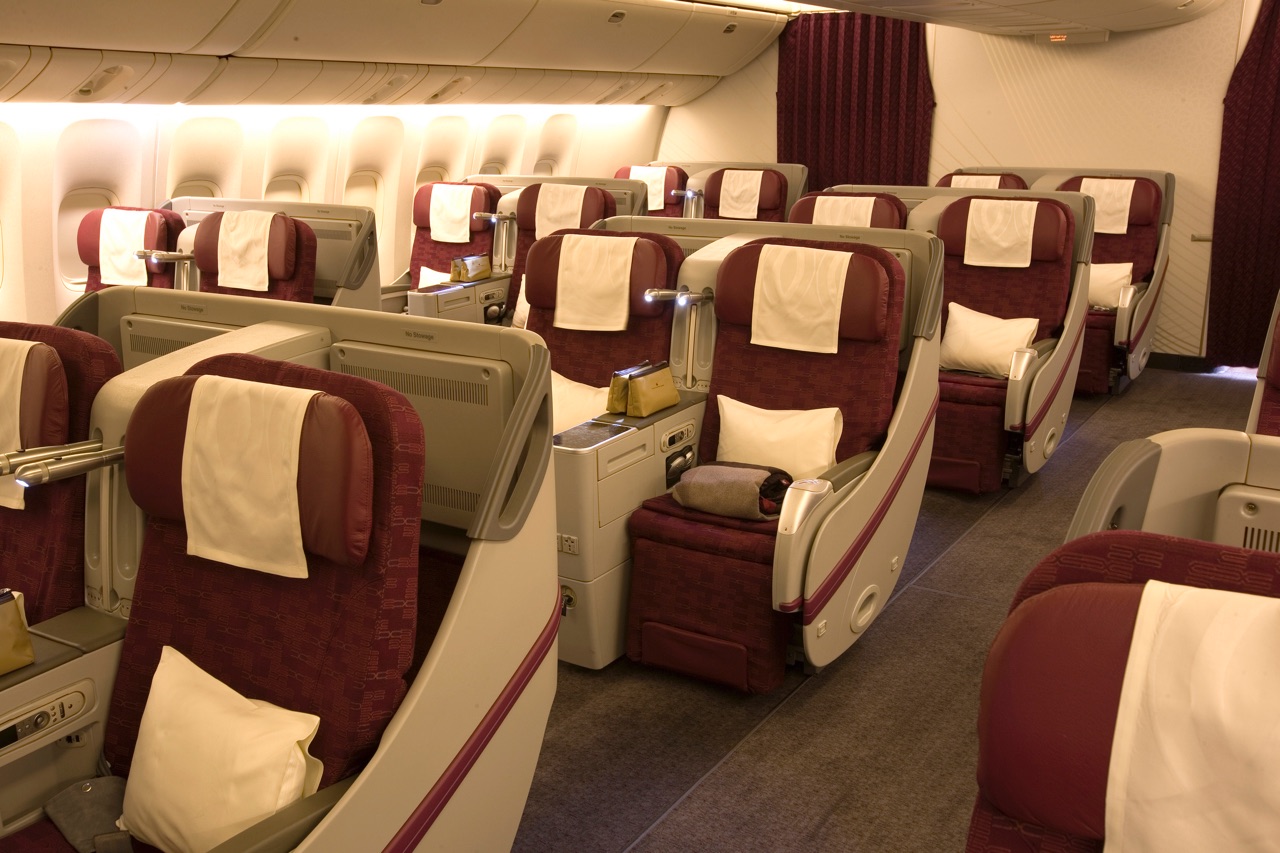 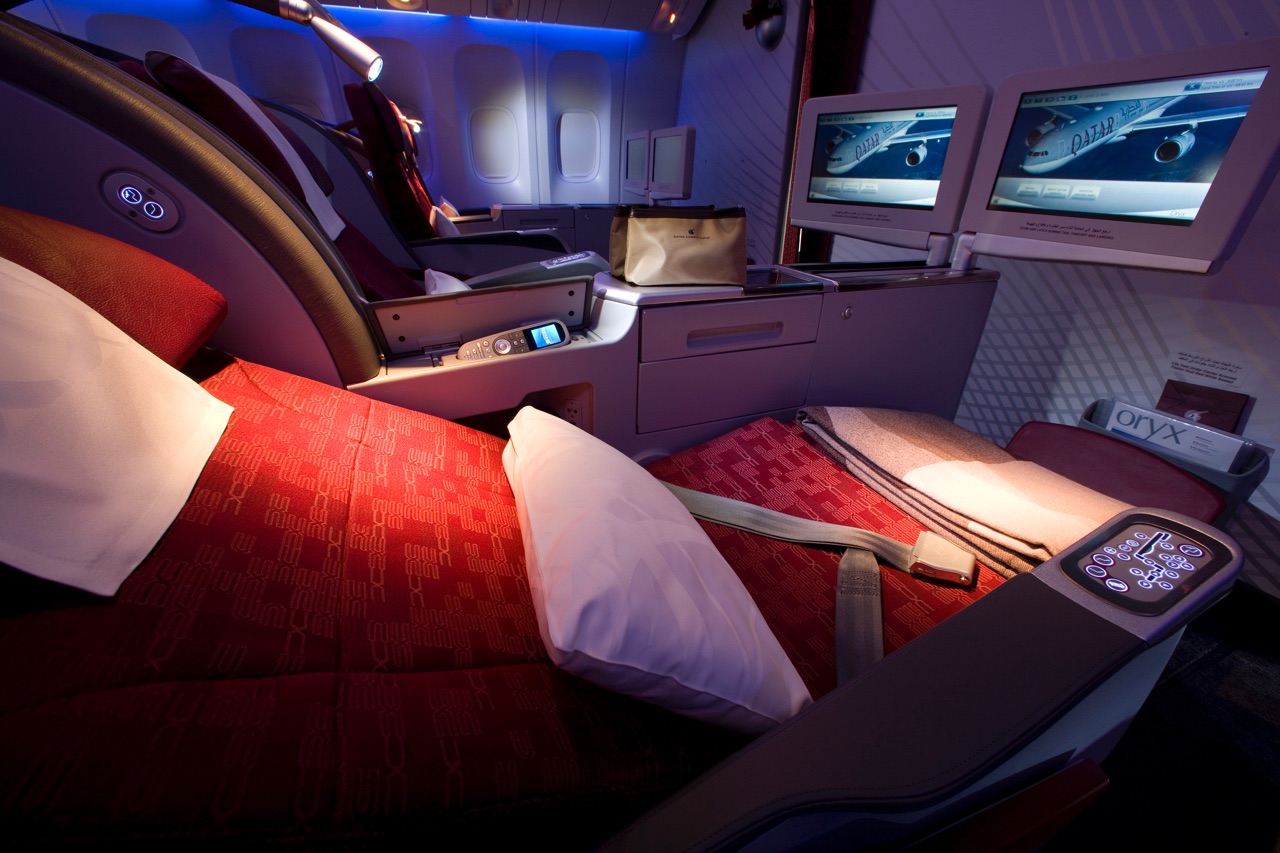 You can read my review of Qatar Airways Business Class on the Boeing 777 from Houston to Doha.

Qatar Airways flights show up in the British Airways booking engine, and then, of course, also in Award Nexus. They can also be booked using Qantas Points, AAdvantage Miles, and Asia Miles.

Here’s a summary of the main oneworld program costs for the direct Qatar Auckland – Doha flight:

Qantas charges 121,000 Qantas Points for one way Business Class, which is more expensive than the comparable Dubai flights flown by Qantas or Emirates at 112,000 points.

If you are flying all the way onto Europe with no stopover, you’ll get more out of your Qantas Points by aiming for a redemption on Qantas/Emirates flights as this will come in at 128,000 points in total.

By comparison, partner award costs are pieced together flight by flight, costing you Auckland to Doha, plus the cost of the flight from Doha to your final destination.

Asia Miles pass on all taxes and surcharges on partner redemptions, so out-of-pocket costs in cash will be similar to using Qantas Points.

Qatar Airways is probably one of the better uses of AAdvantage miles for New Zealand travellers, given the better-than-average redemption availability.

As above, if relying on American Express Membership Reward points, Asia Miles may be the better redemption option.

It’s great to have Qatar flying direct from Auckland to Doha. Kiwis have traditionally needed to travel to Australia first for flights to the Middle East, however Emirates and Qatar are now making it easy to skip the ditch flight altogether.

Asia Miles and AAdvantage award redemptions on Qatar seem to represent the best value for flights to Doha and beyond to Europe, with Qantas Points making more sense for connections through its Dubai co-hub with Emirates.